The museum was established as a cooperative effort by Arkansas Tech, the Ozark-St. Francis National Forest Service’s Russellville office, and the Arkansas Archeological Survey Coordinating Office in Fayetteville (Washington County). Forest Service grants, along with monies from Arkansas Tech, funded the renovation of one-fourth of Tucker Hall to house the museum and early development efforts. Dr. Leslie Stewart-Abernathy, Arkansas Tech Survey Station archeologist, agreed to serve as the curator for the museum. The initial collections included the Louis and Thelma Gregoire Collection, a large archaeological collection donated to the National Forest Service and curated by the museum, materials from a campus history club that existed from the 1920s until World War II, and other items donated to the university.

The museum began public programming with an annual evening lecture series in the spring of 1991, but the official dedication was April 10, 1992. Since opening to the public, the museum has received numerous grants to aid collections stewardship and program/exhibit development. Judith Stewart-Abernathy was hired part time in late 1989 to create renovation plans, oversee the renovation, and develop the museum as a professional facility. Donated collections came primarily from Pope, Yell, Johnson, Logan, and Newton counties, and the same local region generally served as the interpretive emphasis for exhibits.

The museum collections contain more than 150,000 items. The majority of the current collections consists of photographic negatives and some prints from Johnson County, the ongoing Arkansas Tech News Bureau photograph archive, various smaller donations from the local area, and a steadily growing archival and object collection related to Tech history. In addition, the museum continues to curate the Forest Service collection, which includes approximately 100,000 archaeological artifacts from Pope, Yell, and Newton counties. Long-term exhibit topics include an overview of the university’s history, beginning with its establishment in 1909 as a residential agricultural high school; a timeline exhibit centered around the portraits of Tech presidents; an exhibit on campus life focusing on organizations; an exhibit on academics focused on the music program; an exhibit on vocational training prior to 1960; and an exhibit on military pathways to a career. One area has changing exhibits.

By the late 1990s, the museum had one full-time and three half-time employees. By 1999, the museum began to move some functions to the Techionery Building on campus, while maintaining other functions in Tucker Hall.

In 2008, the museum’s mission was changed as part of the university’s centennial celebration. The museum’s focus was narrowed to focus on interpreting Tech history, although the museum’s collections were retained.

By 2010, all museum functions had been moved to Techionery Museum areas. By the fall of 2013, the staff had been restructured, with two full-time professional staff, one graduate assistant, and several part-time student employees each school year.

The museum has four secure collections storage areas, five exhibit galleries, a museum store that serves primarily as an archival supply and resource center, and a multi-use room housing the museum research library while also serving as the museum classroom and a meeting space. The museum staff also maintains two off-site exhibits elsewhere on campus. 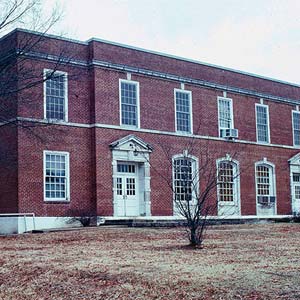