Early on the morning of November 8, 1903, a mob lynched a white man named Zallie C. Cadle in Brinkley (Monroe County) for the alleged murder of a night marshal named J. C. Cox. The Forrest City Times reported that Cox had been a farmer outside Forrest City (St. Francis County) and was “highly esteemed.”

According to marriage and burial records, Zallie Cadle was born in 1873 and married Nancy Simmons in Cash (Craighead County) in 1896. Although the earliest information about the lynching appeared in both the Arkansas Democrat and the Arkansas Gazette on November 10, a later article in the Forrest City Times provides more information. According to this report, Cadle was a lumberman at Hutchinson’s Mill, and he and a man named Charlie Simmons (sometimes referred to as Simons) came into Brinkley on the morning of Saturday, November 7, and began drinking. By 5:00 p.m., according to the Times, they “were in a boisterous humor and ready for trouble.” Cox encountered them and tried to persuade them to go home, but they became “very abusive,” and Cox threatened to arrest them. A fight ensued, during which Cox struck Cadle with the butt of his pistol. Cox then dropped the pistol, and when he bent over to retrieve it, Cadle slashed his neck with a knife, severing the jugular vein. Soon, more officers arrived at the scene, and Simmons and Cadle were jailed. Cox, described by the Democrat as “a man of irreproachable character and a splendid officer” and “everybody’s friend,” died around 10:00 p.m.

According to the Democrat, a mob of between five and ten men made up of what the Times described as “all the best citizens of the town” went to the jail sometime after midnight. They apparently had no difficulty in entering and opening Cadle’s cell. Charlie Simmons, who was in a neighboring cell, heard several shots in the jail, then a scuffle outside and more shots. It seems that Cadle may have run from his captors after he was taken outside and then may have gone into the yard of a neighboring house, as the house’s owner saw four or five men run through his yard and then heard four shots. In the morning, authorities found blood and evidence of a scuffle, as well as Cadle’s hat, in the yard. The mob then took Cadle to a nearby telegraph pole and hanged him. The body was cut down on the morning of November 8, and Coroner W. W. Chinault called a jury to investigate Cadle’s death. The jury ruled that Cadle “came to his death by gun or pistol wounds at the hands of parties unhanged” (probably meant to read “unknown”).

The Gazette reported that Cox’s funeral was held on November 9; stores in Brinkley were closed, and a large crowd of people attended the service. According to the Gazette, “The people of Brinkley regret the lynching exceedingly, but the general sentiment is that Cadle deserved death.” 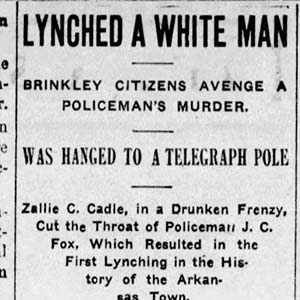