On October 15 or 16, 1883, an African-American man named Wyatt Ames was shot to death near Lexington (some reports say Livingston) in Phillips County for allegedly killing a young deputy constable named Sanders (sometimes referred to as Saunders or Sander) Blount. Presumably, these events took place near Lexington (later renamed Lexa), which is in Phillips County just south of the boundary with Lee County. Wyatt Ames does not appear in any Phillips County records, but in 1870 a ten-year-old named Sanders Blount was living with his father, Richard Blount, in Planters Township. Richard Blount had been in the county since at least 1860, when he was living in Planters Township and had real estate valued at $8,400 and a personal estate of $20,000.

On October 14, the Memphis Daily Appeal reported that Wyatt Ames had been accused of beating his wife, and on October 12 acting deputy constable Sanders Blount was asked to serve a warrant on Ames at his cabin near Lexington. Blount and his brother went to the cabin to serve the warrant, but Ames had fled to the nearby home of a Mr. Langley, where he was hiding under the floor. When the Blount brothers went there and tried to remove Ames, Sanders Blount was shot in the abdomen. Ames escaped in the confusion, and the Appeal reported that a posse was in pursuit and was expected to “swing him wherever caught.”

According to reports in the Arkansas Gazette and the Alton Telegraph, Ames was captured three days later within half a mile of where he shot Blount. The Telegraph reported on October 15, 1883, that the posse searching for him intended to “hang him whenever caught.” Ames, upon his capture, reportedly admitted that he had killed Blount by accident but refused to surrender. He again attempted to escape and was riddled with bullets. According to the Telegraph, “Scarcely a bone in his body remain[ed] intact.” 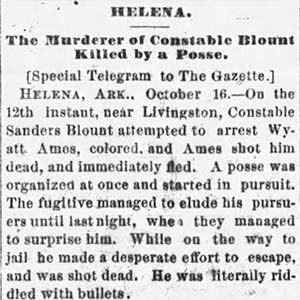