On March 3, 1888, in Little Rock (Pulaski County) three women—Catherine Campbell Cuningham, Mary Burt Brooks, and Haryot Holt Cahoon—published the first issue of the Woman’s Chronicle, a weekly newspaper dedicated to women’s interests, particularly suffrage. Cuningham was listed as the editor, Brooks and Cahoon as associate editors. The previous year, the short-lived Little Rock publication the Southern Ladies’ Journal had ended its run, leaving a void that it appears these women sought to fill. The founding meeting of the Arkansas Equal Suffrage Association had been held the month before, likely generating some of the motivation as well.

The Woman’s Chronicle focused on women’s primary day-to-day interests at the time—cooking, fashion, and literature—in addition to social gatherings, events, and the political issues affecting women. The geographic focus was decidedly local, as reflected by this quote from the “Salutatory” on page one of the first issue: “The name has been selected from the fact that the paper designs to be the reflex of the real life and spirit of this grand old state, not as an outsider sees it, but as we see it who are of it.” The publication eventually became the official publication of the Arkansas Woman’s Christian Temperance Union and reported on charitable organizations and institutions dedicated to the aid of women, children, and the elderly. The issues were distributed among the Arkansas General Assembly to focus their attention on issues covered in the paper.

Originally located at the “corner of Main and Second Streets, over Bolling & Badgett’s drug store,” the Chronicle moved to the second floor of the new Reaves Building, at the corner of Second and Louisiana streets, at what was then 122 West Second Street in Little Rock, a site that later became a parking lot for the Capital Hotel. During a visit to Little Rock in February 1889, Susan B. Anthony, icon of the suffrage movement, visited the Reaves Building offices of the Woman’s Chronicle.

The Woman’s Chronicle ceased publication in 1893 due to the illness of Catherine Cuningham. The paper had never made a profit during its five-year existence, but its loss was publicly lamented by leaders in the suffrage movement. 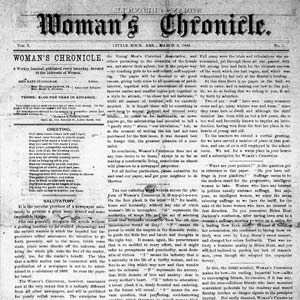