Little information exists about the lynching of an African-American man, Willis Sees, in late April 1899, for the crime of arson—specifically, the burning of barns—in Osceola (Mississippi County).

A brief account, citing a report out of Memphis, Tennessee, circulated in Arkansas newspapers in early May 1899. The whole account reads as follows: “A special to Memphis of April 30th gives an account of the lynching of a negro named Willis Sees at Osceola, Mississippi county. It seems that a number of barns have been fired within the last few months near Osceola, and suspicion was directed toward Sees. The negro’s wife gave information which led to his arrest.”

This account is missing a great deal of information standard to reports on lynching. For one, there is no biographical information on Sees at all, aside from his race and marital status. Second, there is nothing at all on the nature of the mob or the chain of events surrounding the lynching itself. Sees had apparently been arrested, but it remains unstated as to whether the mob broke him from jail or perhaps seized him from authorities on the way to jail. Third, the method of lynching (hanging, shooting, etc.) is also unspecified.

The local paper, the Osceola Times, offers slightly more detail, although not as much as might be expected. On April 22, 1899, the paper reported that a man named Willis See, described as “a copper colored negro,” had been arrested two days earlier and charged with burning the barn of J. W. Quinn. A May 6, 1899, article—titled “Lynching. Following Precedent”—reported that See [sic] was “taken out of jail” on April 30 and “hanged to the same tree, about which, but a little over a year ago, a like tragedy was enacted” (a possible reference to the late 1897 lynching of Henry Phillips in Osceola). The report went on to note: “His body was cut down the next day, and buried in the sands over the bar.” This likely means that he was buried on a sandbar in the Mississippi River.

The May 6 article explicitly avoided any details about the affair, writing: “It isn’t necessary to detail the minutias [sic] of the methods adopted to carry out the purpose of the ‘higher-than-the-law’ tribunal which was judge, jury and executioner.” Indeed, the article constitutes more of an editorial on the nature of mob violence, ending with the lines: “To multiply wrongs will never mend matters. Revenge begets revenge, and hate begets hate. We look in vain in the face of the mobist for smiles indicative of peace within and serenity of mind. They are not happy—they can’t be.”

The lynching was reported in brief at the national level, perhaps most notably by the Chicago Tribune, which, in an account distributed among other newspapers, wrote: “May day was celebrated at Osceola, Ark., by the lynching of Willis Sees, a negro, who was taken from the jail where he was awaiting trial for arson and shot.” 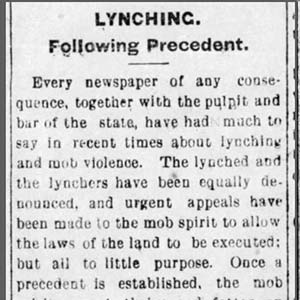