On November 7, 1891, an African American named William Rice was murdered in Conway County for unknown reasons.

News of the event appeared in the Indianapolis Journal on November 9. Citing a report received from Little Rock (Pulaski County) on November 8, the Journal stated that Rice’s body was found hanging from a tree near Plumerville (Conway County) on the morning of November 7. Appearances indicated that Rice had been killed first, and then his body was suspended from the tree.

The November 18 edition of the Pilot of Morrilton (Conway County) reported that Rice’s body had been found suspended on a bridle rein on the Springfield and Dover Road near Solgohachia (Conway County) “last Thursday morning.” This would have placed the incident on November 12, which must have been incorrect, since news of the incident appeared in the Journal on November 9. According to the Pilot, Rice’s neck was broken, and his body had apparently been dragged quite a distance. The hanging was then staged to make it look like suicide.

There were no clues as to the perpetrators or their motives. 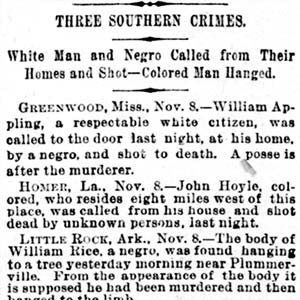