According to the Arkansas Gazette, while there was a large Black population in the area, the “resident negroes…inclined to observe law and order and to give the white people as little trouble as possible.” Anderson, however, who was described as a “strange negro,” had recently arrived in the area; the Arkansas Democrat reported that he had come from Memphis. According to the Gazette, on Saturday, July 7, the seventeen-year-old Anderson attacked Emily Crawford, a “respected widow,” while she was alone at her home near the railroad tracks about three miles south of Tillar. Although she tried to defend herself, the attack was extremely violent.

Anderson escaped, but when news spread of the attack, he was followed and eventually captured at Walnut Lake just south of Dumas in Desha County and ten miles from the Crawford house. He was taken by train to McGehee (Desha County), and then by buggy to Crawford’s house, where she identified him at about 4:00 a.m. on Sunday, July 8.

Anderson was taken back to McGehee, but there was extreme indignation in the area and indications that local citizens would take vengeance. On Sunday evening, in an attempt to ensure that Anderson was really the culprit, a group of fifty to sixty men (some sources estimate the crowd at 100) took him back to Crawford’s home, where she again identified him. Some accounts indicate that he then confessed to the crime. At 9:00 p.m., “without further parleying,” the mob took Anderson to a spot near the Valley railroad track, hanged him from a telephone pole “without any great commotion,” and dispersed. According to the Gazette, the body remained hanging there most of the following day, “as if meant to be a mute, grim reminder that the same fate was in store for similar offenders.” In an appended article, the Gazette noted that passengers on the north-bound train at 2:45 a.m. saw the body hanging near the track in the moonlight. The Democrat reported that “while regret is expressed that the law was not allowed to take its course, all are convinced that the state and county [are] merely saved the expense of trying the brute and hanging him legally.” At last report, while Crawford was in “a critical condition,” there were hopes for her recovery. 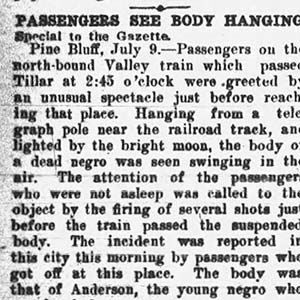