Wesley Chapel is a historic church located near Woodlawn (Cleveland County). Constructed in 1872, the single-story, Greek Revival–style, wood-frame building served the local Methodist congregation until the 1960s. The building was added to the National Register of Historic Places on December 7, 1995.

A small, mostly rural community located in eastern Cleveland County, Woodlawn is located about thirteen miles south of Pine Bluff (Jefferson County). The church was constructed on land donated by Augustus and Margret Bridges, and it operated as part of the Lehi Circuit of the Pine Bluff District, Little Rock Conference of the Methodist Episcopal Church, South. The congregation organized in 1870.

The rectangular building faces U.S. Highway 63 to the west. The narrow ends of the building face east and west, while the longer sides face north and south. Two single-leaf doors are located on the west end of the building and are accessed by narrow sets of steps. The original wooden shingle roof was replaced with an asphalt shingle roof in 1952. The building sat on a wood block foundation that was later replaced with concrete blocks. The original wooden steps were replaced by concrete ones in 1953, likely at the same time the foundation was changed.

The north and south sides of the building are similar in design. Four evenly spaced windows are located on the north side. The original windows are six over six paned but several were replaced by six over one after being broken by vandals. The south side includes a single-leaf door located where the second window from the east end is located on the north side. This door is accessible by a set of steps. The east of the building includes two windows opposite the front doors. The exterior of the building is covered in white painted weatherboard. A sign above the front doors reads “Wesley Chapel Church.” The roof includes end gables and pediment eaves on each end of the building.

The church is located at the northwest corner of the intersection of Norton Road and U.S. Highway 63. Directly across Norton Road from the church is Wesley Chapel Cemetery, where the oldest marked grave dates to 1869. The cemetery is not listed on the National Register and continues to be in use in the twenty-first century.

The congregation disbanded in the 1960s. In the 1990s, a group of local citizens began restoration efforts at the church and began maintaining the exterior of the building. Wesley Chapel serves as a good representation of a rural church from the late nineteenth century in southern Arkansas. 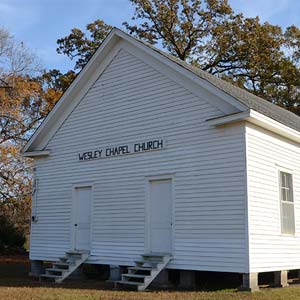