The Webster was a steamboat that caught fire near Island 86 in the Mississippi River off Chicot County on May 2, 1851, resulting in the deaths of forty passengers and crew members.

The Webster, a 324-ton sidewheel paddleboat built in Cincinnati, Ohio, in 1848, was 182 feet long and twenty-seven feet wide with an eight-foot draft. Commanded by Captain Samuel Reno, the Webster was steaming up the Mississippi with about 100 passengers and crew when it caught fire around 3:00 a.m. on May 2, 1851. The flames spread rapidly, and a newspaper portrayed what happened as “a scene ensued which it is impossible to describe, and, mingled as it was with the burning boat, from which the flames were spouting in all directions, became terrible in the extreme.”

The boat’s pilot, a Mr. Ruckman, attempted to run the Webster ashore but was forced to abandon the wheel amid the smoke and flame, and the vessel drifted back to midstream. He rushed to his cabin and led his wife and child out and into the river; the child drowned. The ship’s second pilot, awakened by the tumult, led his wife and child over the side; both perished, though he survived by clinging to a snag.

Panicked passengers hung on to the side of the Webster or dove into the river to escape the flames. The boat’s yawl and three of four skiffs that set out from the Arkansas shore saved several people grasping snags. A Miss C. Dill of Ohio, spying two terrified children, ripped a board from the boat and jumped into the river with the children. They clung to the board, floating downstream for nearly a mile before being rescued by a skiff.

The survivors were initially placed aboard a store boat, the Gray Eagle, and later transferred to the steamboat New Orleans, which took them to New Orleans.

The Webster catastrophe provides another example of the dangers of steamboat travel in Arkansas waters in the nineteenth century, where fires aboard the wooden vessels also caused mass casualties on the Brandywine in 1832, Caroline in 1854, and Mary E. Poe in 1873.

“Incidents Connected with the Burning of the Steamboat Webster.” [Washington DC] Southern Press, May 23, 1851, p. 2. 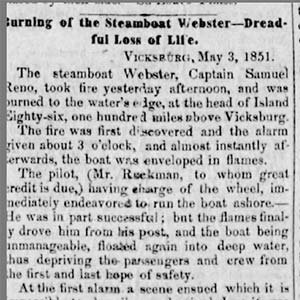 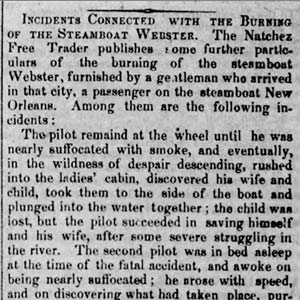