James Theodore (Ted) Richmond was the founder of the Wilderness Library on Mount Sherman in Newton County. For twenty-five years, the library provided free reading material to citizens in northwestern Arkansas.

Ted Richmond was born in Ogallala, Nebraska, on May 26, 1890, the second of five sons of Albert, a pioneer physician, and Etta Richmond. Drafted in 1917, he served during World War I as a private in the infantry and helped establish an American library at the University of Toulouse, France, after the war. He attended several educational institutions: Iowa Business College, University of Chicago, and Missouri Teachers College (now Missouri State University).

His journalistic career included editorial and reporting positions at many newspapers: the Quincy Whig, Gem City of Madison (Fort Madison, Iowa), the Kingston Mirror, and the Chicago Tribune. In 1925, Richmond moved from Evening Shade, Missouri, to the Kingston (Madison County) area, where he worked as the associate editor of Ozark Life: The Mirror of the Ozarks with folklorist Otto Ernest Rayburn. After the magazine was sold in 1931, Richmond settled in “the cove” on Mount Sherman in Newton County. He homesteaded 150 acres in the hills and named his newly built Wildcat Cabin in honor of the bobcat that followed him when he selected the building site.

Richmond soon began lending his only copy of the Bible to any of the mountain folks who wanted to read it. Realizing the need for reading material, he began a letter-writing campaign requesting book and magazine donations. Soon, books and magazines came flooding into the small post office in Plumlee (Newton County) on Mount Sherman, all of which Richmond carried by backpack to his Wildcat Cabin. Materials continued to flow into the library project, with notable donations by Eleanor Roosevelt from the library of her late husband, Franklin D. Roosevelt. Richmond called his newly established library the Wilderness Library.

In search of more funding, Richmond incorporated his Wilderness Library in 1950, with an executive board composed of Sid McMath, Reverend John Gray Wire, Reverend B. N. Wire, Woody Murray, Tom Bill Rogers, and Cora Pinkly Call. Advisory council members included author Bernie Babcock, Reverend Floyd Hitchcock, James W. Trimble, Ernest Nicholson, May Kennedy McCord, and Jeff Raney. The Wilderness Library was the subject of one of a trilogy of Ozark-themed films produced by Cy and Norman Weissman, who had been contracted by the United States Information Agency (USIA); the films were distributed to foreign audiences and proved to be very popular.

In 1952, Hartzell Spence wrote a controversial article for the Saturday Evening Post that included a “hillbilly log cabin” portrayal of the local citizens; Richmond had provided an interview for the article and posed for photos. At a meeting called in the nearby town of Jasper (Newton County), more than 100 people showed up, decrying the article. Richmond attended the meeting uninvited and told the group if he had seen the article before it was published, he would have made twenty-five corrections to it. Word of the story quickly reached the Public Library Trustees in Chicago, Illinois, who convened a meeting in mid-winter of 1953 to discuss the article and the poor picture it painted of public libraries in the region. Articles and editorials were written in newspapers around the country protesting the magazine’s portrayal of a “man trudging through the wilderness with a backpack of books” as the only way citizens could get reading material. While many lamented the article, others relished the “free publicity” provided by the national magazine.

Richmond’s dream of additional funding after incorporating the library was never realized. He moved to Texarkana, Texas, and married Edna Garner; his spouse declined to live in his Ozark cabin, and they had no children. He continued to spend his summers at the branch of the Wilderness Library on Mount Sherman until 1956, long enough to celebrate the library’s twenty-fifth anniversary. Advisory council member Jefferson L. Raney continued to support the Mount Sherman branch of the library until his death in 1977.

In 1956, Richmond left his library forever, and as far as anyone knew, he never returned to his beloved Ozark hills again. To this day, stories abound regarding his sudden disappearance.

Richmond died in Texarkana, Texas, on December 3, 1975, where he is buried. 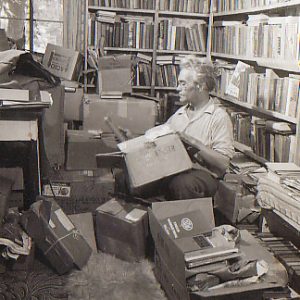 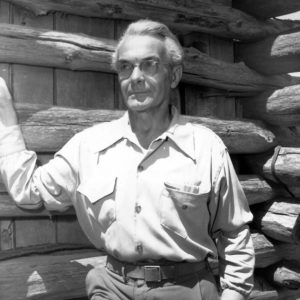