Subiaco Abbey and Academy, a Benedictine monastery and college-prep boarding school, began as St. Benedict’s Colony, established in 1877. St. Benedict’s Colony provided for the settlement of German-speaking immigrants in western Arkansas and laid the groundwork for the Subiaco Academy and Subiaco Abbey, both founded in 1891. The academy and abbey evolved over the last 100 years into the present Subiaco Abbey and Academy, located on extensive farmland in Logan County.

By 1877, Abbot Martin Marty of St. Meinrad’s Abbey in southern Indiana was pursuing his dream of establishing a Benedictine mission on the western frontier. After hearing of the desire for a German Catholic colony in Arkansas, Marty contacted the Little Rock and Fort Smith Railroad in order to obtain the lands required for such a colony. Advertisements for the colony ran as early as November 1877, yet the actual land for the colony was not located until December 1877, when Father Isidor Hobi of St. Meinrad’s found a suitable site near Paris (Logan County) for what became St. Benedict’s Colony.

In many instances, settlers arrived to Logan County before the Benedictine order that advertised the colony. By late January 1878, nearly thirty families had arrived to St. Benedict’s Colony. In the spring of 1878, Father Wolfgang Schlumpf, Brother Casper Hildesheim, and Brother Hilarin Benetz left St. Meinrad’s in a mule-drawn wagon headed for Arkansas. The party arrived at its destination and celebrated the first recorded mass in Logan County on March 19. As the colony grew, the small community was designated St. Benedict’s Priory in the fall of 1878, remaining dependent on St. Meinrad’s Abbey in Indiana. By the end of 1878, nearly 150 families had settled in the colony, with a few additional families arriving in the early 1880s.

The limited funds and personnel from St. Meinrad’s were soon supplemented with help from the Abbey Maria-Einsiedeln in Switzerland. The Abbey Maria-Einsiedeln continued to supply St. Benedict’s Priory with Swiss monks throughout its formative years. In 1887, Father Gall D’Aujourd’hui and eight novices from Switzerland, called the “Eight Beatitudes,” arrived in Logan County to ensure the Benedictine mission in Arkansas’s success. In the same year, St. Benedict’s College opened as the forerunner of the Subiaco Academy.

In the summer of 1891, Pope Leo XIII raised the status of St. Benedict’s Priory to the rank of abbey. With its new status as an independent monastery ruled by an abbot, the priory was renamed Subiaco Abbey. Starting in 1892, Bishop Edward M. Fitzgerald sent seminarians from the Diocese of Little Rock to be trained at the abbey. The training of seminarians at the Subiaco Abbey lasted until 1911.

In December 1901, the first monastery was completely destroyed by fire; fortunately, a new monastery was near completion at the time of this disaster. This new monastery was located on a hilltop and is the present site of the abbey. With the move to its hilltop location, the abbey opened a high school for boys in 1902 and was no longer strictly a seminary.

The town of Subiaco (Logan County) was born when the settlement around Subiaco Abbey and Academy acquired its own post office in about 1910. In the 1920s, Subiaco began to lose many of its German characteristics. Few seminarians were from Germany and Switzerland, and English was spoken more than German. In 1925, Father Edward Burgert, a native Arkansan, succeeded Father Ignatius Conrad, a Swiss-German monk who was elected the first Benedictine abbot in Arkansas in 1892.

Subiaco Abbey again burned in 1927, but this time it suffered a much slower recovery. This fire, compounded by effects of the Great Depression, did not allow Subiaco to recover fully until after World War II. By the 1950s and 1960s, the academy and monastery had recovered, as is evident by its building and expansion. In 1963, Subiaco Abbey opened the Coury House Retreat Center as a retreat ministry for visitors from across the nation. In 1978, Subiaco Abbey and Academy celebrated its centennial.

With 173 students in 2007, Subiaco Academy announced its plans to re-admit eighth graders to the school. Subiaco had admitted eighth graders in the 1940s and 1950s but stopped the practice in 1957. During the twenty-first century, Subiaco boasted an extremely high college placement rate and a diverse student body representing fifteen states and countries such as South Korea, China, and Mexico. Though the majority of students boarded at the school during this time, some day students also attended. Of the over thirty staff and faculty members at Subiaco Academy, almost a quarter are Benedictines.

Subiaco Abbey provides residence to over fifty monks from diverse backgrounds. In addition to teaching at the academy, some monks also serve as pastors for surrounding communities. On the extensive farmlands surrounding the abbey, other monks raise Black Angus cattle, keep the vineyards, operate the sawmill, and grow the produce necessary to make their own Monk Sauce, a habanero pepper sauce. Since 1941, the Benedictine monks of Subiaco Abbey have operated Camp Subiaco for boys aged nine to thirteen. In 2018, the abbey opened to the public a brewery and tasting room.

Historical Commission of the Diocese of Little Rock. The History of Catholicity in Arkansas, from the Earliest Missionaries Down to the Present Time. Little Rock: The Guardian, 1925.

Schuette, Shirley. “Strangers to the Land: The German Presence in Nineteenth-Century Arkansas.” MA thesis, University of Arkansas at Little Rock, 2005. 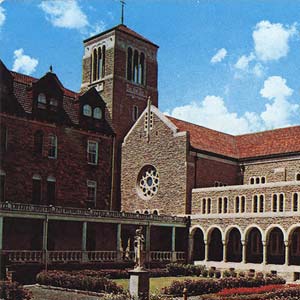