Union County native Stokeley Morgan was a graduate of the U.S. Naval Academy in Annapolis, Maryland, and by the time of his death in 1900, he had completed over twenty-three years of service in the U.S. Navy. He is best known for having commanded the battery onboard the battleship USS Olympia at Manila Bay, Philippines, that is credited with having fired the first shots by the United States in the 1898 Spanish-American War.

Stokeley Morgan was born in August 1859 in Mount Holly (Union County) to Asa Morgan and Eliza Wright Morgan. He had two older brothers, a younger sister, and a half-brother.

He completed his early education in Union County and in 1876 secured an appointment to the U.S. Naval Academy with the assistance of Third District Congressman William Slemons. He graduated from the academy in 1880, eleventh in his class. Sometime later, he returned to his alma mater as an instructor of physics and chemistry. He married Mary Eleanor Williams on September 25, 1888. The couple had one son, who was born in 1893.

He entered active service as an ensign onboard the sloop USS Junita under the command of Admiral George Dewey. His active sea duty over the next eighteen years included traveling to the West Indies, surveying a route for a proposed Nicaraguan canal, surveying the lower coast of California, and surveying a Pacific cable to Honolulu, Hawaii. He also served on the battleships USS Texas, USS Monocacy, USS Yorktown, and finally the USS Olympia in 1896.

At Manila Bay on May 1, 1898, Lieutenant Morgan commanded USS Olympia’s forward Number 1 Main Turret Battery, which consisted of a pair of eight-inch guns. The American fleet was about to engage the Spanish fleet charged with protecting the port city. When Admiral Dewey signaled that the firing was to commence, it was Morgan’s battery that fired what is considered by many to be the first shot of the Spanish-American War. During the engagement, which lasted several hours, Morgan commanded his battery and was knocked down several times by the concussions from the two dozen shells fired by his men. His battery was instrumental in defeating the Spanish and sinking two of their main ships: the Reina Christina and Castilla. The next day, Morgan commanded a landing party of sailors and destroyed the munitions stored at the arsenal at Cavite Fort. Morgan was also present for the official surrender of Manila on August 13, 1898.

Not long after the Battle of Manila, Morgan fell ill, believed to be due to neurological damage caused by exposure to the repeated concussions of his battery at Manila. He was transferred to shore duty at the Washington Navy Yard, where he worked in ballistics. When his health further deteriorated, he was required to take a leave of absence, which led to his retirement for medical disability several months later at the rank of lieutenant commander.

After his retirement, Morgan and his wife moved to Massachusetts, outside Boston. His health continued to worsen. He died from paralysis in Roxbury, Massachusetts, on November 10, 1900. He is buried at the U.S. Naval Academy Cemetery in Annapolis.

Musicant, Ivan. Empire by Default: The Spanish American War and the Dawn of the American Century. New York: Henry Holt and Company, 1998.

Military
Post-Reconstruction through the Gilded Age, 1875 through 1900 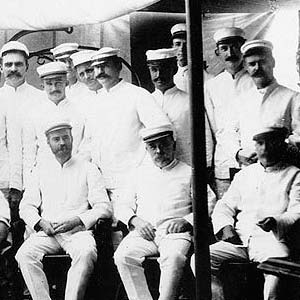