The St. Nicholas was a steamboat that ran between St. Louis and New Orleans, Louisiana. It suffered a catastrophic boiler explosion on April 24, 1859, and caught fire on a stretch of the Mississippi River near where the Pennsylvania had met a similar fate a year earlier. Sixty passengers and crew members were killed in the accident.

The St. Nicholas was a 666-ton sidewheel paddleboat built at California, Pennsylvania, in 1853 for James Wood, P. R. Friend, and P. O. Scully of Pittsburgh, Pennsylvania. By 1859, it was owned by Ambrose Reeder of St. Louis, Missouri, and Ben V. Glime, who served as clerk on the St. Nicholas. Oliver H. McMullen was captain.

The vessel was headed toward New Orleans on April 24, 1859, carrying twenty-six cabin passengers, twenty-three deck passengers, and twenty-eight crew members, as well as a load of produce that filled about two-thirds of its cargo hold. As the St. Nicholas neared Island No. 60 north of Helena (Phillips County), at least one of its boilers exploded. A newspaper reported, “The boat took fire, the flames spreading with great rapidity, and quickly enveloping the whole boat in one sheet of flame.”

Captain McMullen was trapped by fallen timbers after the explosion, and though he managed to free one leg, the other was stuck fast. As the flames approached, he begged the crew members who were trying to free him to cut his leg off, but they were unable to do so, and McMullen was burned alive while, as a newspaper reported, “his cries for help were distinctly heard by those around him.”

The explosion hurled sleeping second clerk H. H. Gillman 100 feet from the boat, and he woke up floating down the Mississippi atop his mattress; though slightly scalded, he survived the accident. First mate John Blaise lowered the St. Nicholas’s yawl and pulled people in the river aboard, taking them to safety ashore. Other people floated downstream clutching planks while some still clung to the flaming hulk of the St. Nicholas.

The north-bound steamboat Susquehanna approached the burning wreckage of the St. Nicholas shortly after the explosion. It took survivors aboard, later transporting them, including sixteen desperately injured people, to Memphis, Tennessee. Four badly wounded people died aboard the Susquehanna.

Sixty people died in the St. Nicholas disaster, either scalded to death in the boiler explosion, burned in the subsequent fire, or drowned in the Mississippi. The steamboat, valued at around $25,000, and its cargo were a total loss.

The St. Nicholas catastrophe is one of many examples of the dangers of steamboat travel in Arkansas waters in the nineteenth century, where boiler explosions also caused mass casualties on the Car of Commerce in 1828, the Rob Roy in 1836, the Persian in 1840, the St. Joseph in 1850, the J. Wilson in 1853, the Pennsylvania in 1858, the Sultana in 1865, and the Miami in 1866. 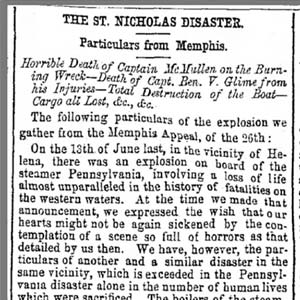 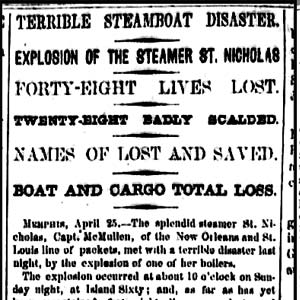 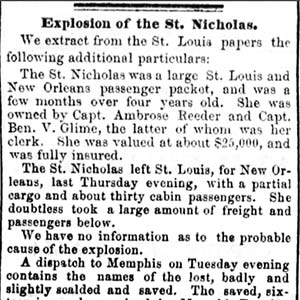