The St. Francis County Museum was originally located at 419 Front Street in Forrest City. It opened at this location in 1995 but quickly outgrew its environment. The members of the Rush family were contacted by Brad Beavers, a local attorney, to move the museum into their former residence, located in downtown Forrest City at 603 Front Street. The St. Francis County Museum bought the Rush-Gates Home and celebrated the grand opening in August 1997 after some renovations.

The Rush-Gates Home was built in 1906 by J. O. Rush, a doctor, local historian, and prominent member of the Forrest City community. The building was used as his residence and housed his medical practice until his death. Rush started collecting Native American and prehistoric artifacts in 1912 when he helped a patient on the outskirts of St. Francis County who was unable to pay him for his time. As he was leaving, he noticed some pottery in the patient’s yard and accepted it as payment. Over his lifetime, he collected and cataloged more than 3,700 pieces. Much of his personal collection was donated to the museum by his descendants.

The St. Francis County Museum is a museum of general county history, with an emphasis on the stories of the J. O. Rush Family. The museum gets some support from the local townships but otherwise depends on donations, fundraisers, and grants to finance its operation.

Features of the museum include a 1920s parlor, the “Rush Room” with Indian artifacts, Rush’s reconstructed clinic office, the military room where seven wars are represented, the agriculture room, and the business room. The overall collection has been acquired through donations from local families and businesses. Between 1995 and 2011, the number of artifacts in the collection doubled. The museum is, as of 2011, undergoing further revisions to expand the number of exhibits to include the “Hall of Schools” highlighting education in St. Francis County, a genealogy room offering research terminals with Internet access, and a railroad room. The building also houses the offices for the St. Francis County Community Foundation and the St. Francis County Elves birthday books project, a non-profit organization.

The museum holds an annual gala to raise money for renovations and maintenance of the Rush-Gates Home. The museum also can be reserved for events throughout the year. Representatives of the museum take traveling exhibits to display at local fairs and festivals in St. Francis County throughout September.

The St. Francis County Museum has also been named one of the top ten haunted buildings in Arkansas by the Arkansas Paranormal and Anomalous Studies Team (ARPAST). The museum partners with local hotels to take visitors on “haunted” tours. Private parties can also be booked to learn how to “ghost hunt” with professionals and search the home for the paranormal. 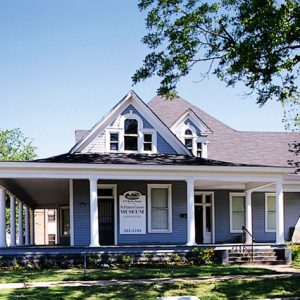