Sidney Wallace was a legendary part of the state’s folklore during Arkansas’s Reconstruction. Some portrayed him as boldly resisting bushwhackers and carpetbaggers, while, to others, Wallace was a symbol of the lawless frontier life that Arkansas needed to transcend.

Sid Wallace was born on the Wallace family farm near Clarksville (Johnson County) on August 11, 1851, the fifth of seven children of Vincent Wallace, a Methodist minister, and his wife, Ruth Suggs Wallace. On December 31, 1863, Wallace’s father was murdered in front of his house by three or more men wearing Union army coats. Accounts vary concerning the attackers, whether they were Union soldiers or local bushwhackers in disguise. Some accounts suggest that Wallace was a witness to his father’s murder, but others state that he was sheltered from the sight by the family servant (formerly their slave), Missouri Blackard, and perhaps by his mother. According to folklore, Blackard recognized all the attackers, but she refused to identify them to Wallace until he reached his twenty-first birthday.

Folklore has it that, after learning the identity of his father’s killers, Wallace traveled to Kansas to kill one of the attackers. He allegedly shot Joseph T. Dickey on a road outside of Clarksville and beat up Dud Turner, a witness to the Dickey shooting. Wallace is also alleged to have killed a man named Davis in Clarksville, Constable R. W. “Doc” Ward, and Judge Elisha Mears. Finally, from his prison cell in Clarksville, Wallace shot and killed Thomas Paine on November 25, 1873. Paine had testified against Wallace regarding the murder of Ward. Some insist that some or all of these shootings were related in some way to the death of Wallace’s father.

Wallace also proved to be a difficult man to keep in prison. When he was first arrested for the shooting of Dickey, he removed the jail window and returned home. Reportedly, when a posse arrived to take Wallace back into custody, he left the house hiding under the skirts of Blackard while she went to the family well. After he was back in his cell in Clarksville, Wallace overpowered his guards, seizing their weapons and shooting Paine, although some claim that a girlfriend had smuggled a gun to Wallace in the prison. The standoff at this time ended after Clarksville authorities threatened to blow up the building containing Wallace and his two younger brothers.

Wallace appealed his conviction for the murder of Ward on the grounds that he was unable to receive a fair trial in Johnson County. He and his family consistently maintained that he had been at home, ill, at the times of the shootings of Ward and Mears. Wallace was held in the state penitentiary in Little Rock (Pulaski County) from February 18 until March 9, the Arkansas Supreme Court having ruled against his appeal on February 5. According to folklore, Wallace was allowed out of prison one evening during this period to accompany the warden’s daughter to a social ball. The warden is said to have reversed his feelings about the prisoner when his daughter begged that Wallace be permitted to escape so that the couple could elope. On March 10, the Arkansas Gazette reported that 1,068 Johnson County residents had signed a petition requesting that Wallace’s sentence be commuted.

According to an article in the March 11, 1874, Gazette, Wallace arrived in Clarksville uneventfully, although later accounts paint a dramatic tale involving seizure of the train by Clarksville marshal Bud McConnell to prevent Wallace from being rescued before his hanging. Wallace was hanged in Clarksville on March 14, 1874, in front of hundreds of witnesses. Because his heart was still beating twenty-five minutes after the hanging, he was left suspended for forty minutes, at which point his body was declared dead and surrendered to his family for burial. Later accounts state that he may have survived the execution and that the casket buried by his family contained only bags of sand. Such legendary accounts were believable only long after Wallace was publicly hanged.

Adding more intrigue to the story, the March 15, 1874, Daily Arkansas Gazette article about his hanging speaks of a mysterious note accompanying a bouquet of flowers and a basket of fruit sent to Wallace by a woman in Little Rock. Other accounts describe a woman from Little Rock, dressed in black, who attended the hanging. The New York Times published an account of Wallace’s crimes and execution a week after his hanging, sadly concluding that Wallace’s mother had encouraged her two younger sons to follow in the footsteps of their martyred brother.

The Times article and other descriptions of Arkansas history show Wallace as an example of frontier violence following the Civil War. Books such as C. H. McKennon’s Iron Men, which details law enforcement in Arkansas and neighboring areas, focus attention on the violence of men like Wallace, often exaggerating their exploits to point to the need for better law and order. Wallace has become somewhat of a folk hero for others, though, as a symbol of local resistance to Reconstruction. Accounts of his attacking only those who murdered his father are not supported by historical evidence, but they continue to be shared in some circles. Ironically, both those who describe Wallace as a hero and those who emphasize his criminal behavior overlook Wallace’s frequent claims that he killed no one except in self defense and that he had been framed for local crimes. 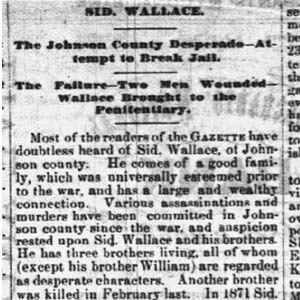 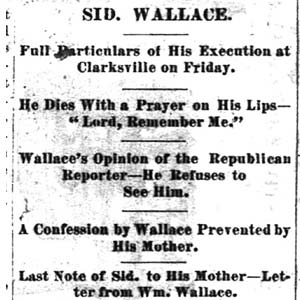