The Sequoyah National Research Center at the University of Arkansas at Little Rock (UALR) seeks to acquire and preserve the writings and ideas of Native North Americans by collecting the written word, art, and other forms of expression by Native Americans and to create a research atmosphere that invites indigenous peoples to make the center the archival home for their creative work. The mission is fulfilled by serving tribal communities, promoting scholarly research both on the UALR campus and worldwide, creating educational programs, providing access to the center’s collections, and collaborating with like–minded institutions and organizations across the United States.

What is now the Sequoyah National Research Center began in 1983 after two tenured faculty members from the English Department at UALR, Daniel F. Littlefield Jr. and James W. Parins, took a research trip to the Arizona State Museum in Tucson to research Native American writers and newspapers. At the time, the librarians were weeding the library of their collection of Native American–published newspapers and periodicals. Hating to see the collection discarded, the professors decided to bring the newspapers back to Little Rock.

The two men decided that they would create a clearinghouse, and thus established the American Native Press Archives (ANPA). That same year, Native American author Vine Deloria Jr. had stressed the need for a national depository focused entirely on Native American expression in the United States. Several Indian organizations, historical societies, and other institutions had tried and failed in this endeavor. ANPA sought to fill that void and began accepting donations from individuals and other libraries and museums, expanding the initial collection.

Both Littlefield and Parins volunteered their time, as the ANPA had no operating budget. Littlefield, a native of Salina, Oklahoma, first came to UALR in 1970, having been a full–time teacher since he was twenty-two. Littlefield earned his doctorate in 1970 from Oklahoma State University in Stillwater, where he also taught full–time. Parins, born and raised in Green Bay, Wisconsin, earned his doctorate from the University of Wisconsin at Madison in 1972 and joined the faculty at UALR in 1973.

While Parins did not have the deeply rooted interest in Native American history that Littlefield had, they both shared a love of writing and research. By the latter part of the 1970s, they had begun collecting and cataloging as much American Indian writing as they could. In 1984 and 1985, the two compiled the three-volume set American Indian and Alaska Native Newspapers and Periodicals, 1826–1924, published by Greenwood Press, that revolutionized the field of Native American Studies. Other publications produced through their collaboration are: A Bibliography of Native American Writers, 1772–1924 (1981), Native American Writing in the Southeast: An Anthology, 1875–1935 (1995), and the Encyclopedia of Indian Removal (2011). Other published collaborations from the center include The North Little Rock Site on the Trail of Tears National Historic Trail: Historic Context Report (2003), a project completed for the National Park Service, and Chickasaw Removal (2010), with Amanda Paige, Fuller Bumpers, and Daniel Littlefield.

The collections kept growing, and their offices in Stabler Hall filled to capacity. Littlefield and Parins took over eight other offices in Stabler Hall, which also filled quickly. Soon, the collections were so large that they were moved onto the third floor of the Ottenheimer Library on UALR’s main campus. In 1985, Littlefield and Parins joined the Native American Journalists Association, which resulted in the establishment of ANPA as a national collection. The collecting focus soon expanded to include personal manuscript collections of journalists and reporters for tribal newspapers. Newspapers are added to the collection on an almost daily basis with 100 current subscriptions found within the holdings.

In the 1990s, Chancellor Charles Hathaway, future chancellor Joel Anderson, and the UALR English Department recognized what Littlefield and Parins were doing with their collection, and both were given work releases to devote more time to the project. In 1997, Dr. Robert Sanderson (of the Micmac tribe), a member of the Department of Sociology, began working at ANPA after co–teaching a class with Littlefield on American Indians 1887–1935. In 1999, Chancellor Hathaway authorized funds for the growing archives to hire graduate students, buy much–needed computer equipment, and develop their first website.

It was at this time that the ANPA became the Sequoyah Research Center (SRC). When Joel Anderson replaced Charles Hathaway as chancellor in 2003, he continued to help the SRC move forward. In 2005, the SRC was recognized as a separate unit on campus, receiving its first operating budget from the university in fiscal year 2006; previously, funds were obtained through local and national granting agencies. Littlefield became the center’s director, while Parins and Sanderson shared responsibility as associate directors. In 2008, upon the suggestion of Chancellor Anderson, the SRC formally changed its name to the Sequoyah National Research Center (SNRC). That same year, a space of 7,200 square feet was provided for SNRC in the University Plaza in Little Rock (Pulaski County), with the promise that a permanent home was in the university’s future plans.

In 2004, J. W. Wiggins, retired dean of UALR’s College of Sciences and Mathematics, donated his collection of contemporary Native American art to the university. Once the new University Plaza space was acquired by the center in 2008, it was decided that the Dr. J. W. Wiggins Collection would be housed at the center. In 2015, the university separated the art collection from the research center to create the Wiggins Gallery, although the two units share the same physical space. Wiggins serves as the curator for the 2,400–plus–piece collection.

In September 2011, Erin Fehr (of the Yup’ik tribe), a former summer intern, was hired as the first archivist. Fehr completed her master’s degrees in both library/information studies and musicology at the University of Oklahoma in Norman. In October, the Trail of Tears Park located on the Asher Avenue side of Coleman Creek was dedicated, with representatives of both the Chickasaw and Choctaw nations in attendance. SNRC was a driving force in the park’s creation, which marks a popular stopping point and watering hole used during Indian Removal.

Since the beginning, the center has been dedicated to the education of UALR students by supplying work–study positions, providing internships, and mentoring young scholars. Additionally, each summer since 2010, the center hosts three Native American students, who complete a two–month internship.

In 2022, the SNRC completed the eighteen-month process of relocating from University Plaza to the Fine Arts building on the UA Little Rock campus. 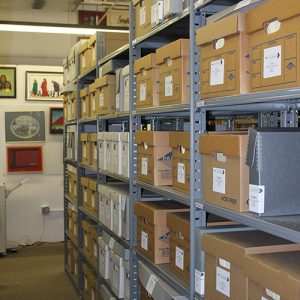