Arkansas’s reptilian biodiversity includes four groups—turtles, lizards, snakes, and the American alligator—each with a sharply different body morphology. By closely examining the morphology of these varied groups within the class Reptilia, today’s phylogenetic taxonomists (individuals who study the evolutionary relationships among species) have found that members of this class share several recently derived features (such as skull characteristics) with birds. Because of this modern understanding of the evolutionary relationships among reptilian ancestors and their descendents, which include dinosaurs and birds, some taxonomists have proposed a new class (Eureptilia) to include dinosaurs, birds, crocodylians, all of their close diapsid relatives (including lizards and snakes), and a number of extinct groups. However, the classical taxonomic designation for the class Reptilia includes turtles, tuataras, squamates (lizards, snakes, and amphisbaenids), and crocodylians.

General Characteristics of Reptiles
Turtles have been affectionately called reptilian armored tanks. With both a dorsal (carapace) and ventral (plastron) shell, turtles exhibit a body type unique among vertebrate animals. Shell shape and size also varies greatly among turtles. The turtle shell is normally covered with large polygonal epidermal scales or scutes. As a group, turtles are the only toothless reptiles. Turtles possess some of the more bizarre bodily dimensions found in vertebrate animals, from the body-long necks of the sideneck turtles of South America and Australia to the flipper-like forelimbs of tropical sea turtles.

Turtles have adapted well to an array of land and aquatic environments. All turtles lay shelled eggs that are deposited into nesting cavities constructed by the females. Fertilization is internal and is accomplished by a highly vascularized penis. Freshwater turtles are often called terrapins, whereas terrestrial turtles have been termed tortoises. Turtles are thought to have evolved from a stem reptile sometime during the early Carboniferous Period, about 350 million years ago. Today, over 263 species of turtles are distributed worldwide; as a group, turtles are the planet’s most endangered reptiles.

Lizards and snakes are highly diverse and speciose (rich in number of species) vertebrates, with over 4,765 lizard species and 2,978 snake species worldwide. Both groups are classified together as squamates, an order that also includes subtropical amphisbaenid (worm-like) reptiles. The tuatara, is a primitive, lizard-like reptile (of which there are two known species) occurring in New Zealand and several surrounding small islands. This unusual reptile still retains features of its early reptilian ancestors, which date back to the late Permian/early Triassic periods.

Several obvious external features separate lizards from snakes; for example, lizards have movable eyelids and an outer ear canal. The absence of limbs is a hallmark characteristic of snakes, yet there are also many species of limbless lizards. Snakes are thought to have descended from a lizard-like ancestor; the oldest known fossil snake dates back to about 135 million years ago during the early Cretaceous Period. The largest lizard is the Komodo dragon, measuring around ten feet in total length, whereas the largest snake, the anaconda, measures over thirty-six feet in total length.

Although lizards may consume both plants and animals, snakes have a strictly carnivorous diet. Snakes have the unique ability to greatly expand their mouth’s gape and consume prey that are much broader than their own bodies. A detachable lower jaw and flexibility among skull bones assist in the swallowing process. Some snakes use asphyxiation by constriction to subdue their prey following capture, yet snakes, as a group, are best known for their ability to envenomate prey. The venom delivery system has evolved into several distinct morphological designs in snakes. Most species of venomous snakes are front-fanged, but some species are rear-fanged. Among the front-fanged snakes, the upper maxillary fangs can be either movable and retractable or rigid and firmly attached to the maxillary bone. Some pit vipers have enormous fangs. Associated with the fangs of pit vipers are thermally sensitive facial pits that enable the snake to help track down envenomated warm-blooded prey, such as mammals and birds.

Lizards and snakes share unique, paired copulatory organs called hemipenes, which can be everted into the female’s cloacal opening for insemination. Although turtles and crocodylians are strict egg layers, lizards and snakes normally either lay eggs or give birth to live young. In those species that give birth, nutrients are transferred to an embryo either directly from the mother through the placenta or from the embryo’s egg yolk retained within a shell-less egg and held in the mother’s reproductive tract until birth.

Crocodylians are an ancient group of reptiles; their origins date back into the Late Triassic, around 230 million years ago. There are twenty-three species of living crocodylians, mostly distributed in the tropical and subtropical regions. The American alligator (Alligator mississippiensis), the only crocodilian that occurs in Arkansas, is one species that has extended its range slightly into the higher latitudes of the temperate zone in North America. Crocodylians have retained a primitive body form that includes strong limbs on an elongated body. The thick tail is laterally compressed and is used extensively in aquatic locomotion, but it can also be used as a defensive weapon. The massive skull supports many-toothed jaws and a powerful set of jaw muscles. All female crocodylians construct nesting mounds in which they can deposit two to four dozen eggs.

Arkansas Turtles
Nineteen species and subspecies of turtles are known to occur in Arkansas. These turtles have a variety of common names, including painted, chicken, map, box, mud, and musk turtles, and sliders, cooters, snappers, and softshells. As is the case with all of their reptilian relatives, turtles derive their body heat from their surroundings. Among these various forms, the seasonal life cycles and daily activity patterns may vary greatly. Winter is generally a time of inactivity. To compensate for low ambient temperatures during the active season, which generally extends from April through October, many diurnal aquatic turtles bask as a method of warming their bodies. Basking also promotes carapace drying, growth, and maintenance. Some strictly aquatic turtles (e.g., the mostly nocturnal alligator snapping turtle, Macrochelys temminckii) rarely bask, whereas most semi-aquatic turtles alternate between basking and feeding during their daily activity, combining nocturnal, crepuscular (twilight), and diurnal activities. On rare occasions even terrestrial turtles, such as the three-toed box turtle (Terrapene carolina triunguis), may become aquatic in order to escape predation.

Most turtles mate in the spring. Some courtship activities include biting, chasing, and stroking by males that possess elongated foreclaws, as observed in male river cooters (Pseudemys concinna). Depending upon the species, copulation may occur either in the water or on land. Males often possess concave plastra in order to compensate for a female’s dome-like carapace.

Arkansas Lizards
Thirteen species and subspecies of lizards are found in Arkansas; their common names include legless, collared, horned, and fence lizards; skinks; and racerunners. The legless lizard, the western slender glass lizard (Ophisaurus attenuatus), is often mistaken for a snake. The most colorful and regal of the Arkansas lizards is the eastern collared lizard (Crotaphytus collaris), a common species found in exposed rock outcroppings throughout most of the Interior Highlands. Skinks are among the most common lizards; there are six different species of skinks that share several features. For example, all have shiny, smooth scales and possess tails that easily break when handled. Adults of two skink species—the southern prairie skink (Eumeces septentrionalis) and the southern coal skink (Eumeces anthracinus)—look strikingly similar. Adult southern prairie skinks possess two postmental scales (found below the chin), whereas adult southern coal skinks have only one postmental scale. Hatchlings of the southern coal skink have orange and white markings on their heads in contrast to their dark bodies and blue tails. In fact, most juvenile skinks possess blue tails, but this color fades as the animals reach sexual maturity in most species. A longitudinal striping pattern is also present in most skinks.

Although all Arkansas lizards lay eggs, female skinks remain with their egg clutches during the entire incubation period. This behavior is also seen in the western slender glass lizard. Females of other lizard species quickly abandon the nesting grounds following egg deposition. Nests of the prairie racerunner (Aspidoscelis sexlineata) and the western fence lizard (Sceloporus undulatus) can be excavated from loose sandy/red clay soils along highway embankments of secondary highways throughout most of Arkansas.

Arkansas Snakes
Snakes are possibly the most inspiring and intriguing of all of Arkansas’s reptiles. Snakes can both instill terror and fright and initiate great interest and fascination. The general public has little knowledge of the forty-five or so species and subspecies that dwell within the state’s borders. Although attention is primarily given to the six venomous species, the majority of snakes are non-venomous and seldom seen.

Besides limblessness, coloration is perhaps the most striking feature of snake morphology to most people. The most colorful snakes seem to generate the greatest concern and apprehension among Arkansans. This may be due to the fact that one colorful venomous snake, the Texas coral snake (Micrurus fulvuis), is found within the state. In actuality, this snake is seldom encountered and found in only a few counties in southern Arkansas. However, several common species look similar to the Texas coral snake. Among these are the milk snakes (red milk snake, Lampropeltis triangulum syspila, and the Louisiana milk snake, Lampropeltis triangulum amaura), the northern scarlet snake (Cemophora coccinea copei), and the ground snake (Sonora semiannulata). The old adage, “Red touching yellow—kill a fellow; red touching black—friend of Jack,” is a good way to distinguish the venomous coral snake from its nonvenomous mimics.

Possibly the most entertaining species is the eastern hognose snake (Heterodon platirhinos). Although hognose snakes are rear-fanged, their venom is very mild. Hognose snakes can be colorful or dull, but they can charm a potential threat or curious human when they go through their death-feigning behavior when threatened. This highly ritualistic behavior begins with a defensive posture involving the spreading of its neck and head. This is normally followed by a ventral body display, and sometimes the act involves regurgitation and defecation accompanied by writhing of the body with the tongue extended. This behavior is simply an “act,” as this species will soon roll over and slither off.

A common terrestrial venomous species, the southern copperhead (Agkistrodon contortrix), is the most frequently encountered of all venomous snakes. Copperheads can be found in all counties in Arkansas. The western diamondback rattlesnake (Crotalus atrox), on the other hand, is the least encountered venomous snake. This species dwells primarily in mountainous regions of the Ouachita Mountains and the Arkansas River Valley. Timber rattlesnakes (Crotalus horridus) are distributed throughout all regions and, because of this fact, should be considered the most dangerous of the rattlesnakes. The western pigmy rattlesnake (Sistrurus miliarius) is a small terrestrial species that is most common in rocky habitats in the interior highlands and the West Gulf Coastal Plain.The western cottonmouth (Agkistrodon piscivorus) is the most common venomous snake that occurs in aquatic habitats throughout Arkansas. People often confuse harmless water snakes with cottonmouths. Cottonmouths are possibly the most ill-tempered of the venomous pit vipers of Arkansas.

For some people, the mere thought of venomous snakes causes needless fear and concern and, unfortunately, leads to the senseless killing of all snakes. The automatic killing of snakes because they may be venomous (or not) represents ignorance and a lack of critical judgment about Arkansas’s native wildlife. 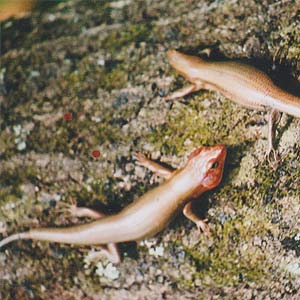 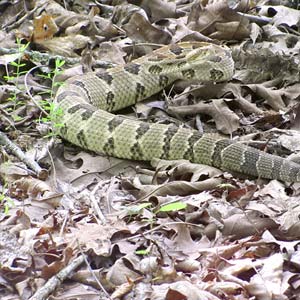