The Rackensack Folklore Society was organized for the purpose of perpetuating the traditional folk music of the people of Arkansas, particularly in the mountainous area of the north-central part of the state. Stone County, located in the area, was unique in having music-making families throughout its boundaries who founded the base of the Rackensack organization.

The society was begun by Lloyd Hollister, a doctor, and his wife, Martha. They came from the Little Rock (Pulaski County) area in 1962 and settled in the Fox (Stone County) community. Hollister set up his medical practice in Mountain View (Stone County) with Howard Monroe, a noted surgeon in the area. The Hollisters attended various musical sessions in the Fox community and joined in the music-making.

In February 1963, Hollister held a meeting with six others at the Monroe Clinic to form an organization that would reach out to the people of the area and provide an opportunity for them to share their music with the public. Before adjourning, it was decided to meet again that week and organize the new folklore society, elect officers, and solicit membership. The seven charter members of the new organization were Hollister, Eddie A. Walker, William (Willie) P. Morrison, Glenn D. Morrison, Lloyd Westbrook, Otis Johnson, and Gerald Cain. Musician Jimmy Driftwood attended the second meeting, where Hollister was elected president, with Driftwood as vice president. Driftwood suggested naming the organization the Rackensack Folklore Society.

In the next few weeks, several meetings were called to address the different issues. Walker informed the membership that John Opitz had told him that a plan to have a large public gathering of musicians would be beneficial because it would promote Mountain View as it tried to bid for a water system and possibly justify an investment in a cultural center. The Rackensack Folklore Society scheduled a folk festival for the third weekend in April. By this time, Rackensack membership had grown to more than sixty.

The group acquired permission from the county to use the courtroom in the courthouse for practice sessions for the upcoming festival program. These Friday night sessions became a weekly attraction to the public and were continued until the Ozark Folk Center was built. Turnout for the April folk festival was phenomenal, with local, state, and national media covering the event. In response, the Rackensack Folklore Society established itself as a permanent organization. Rackensack continued to have an annual folk festival the third weekend in April until the early 1970s, at which time the city of Mountain View, with its newly formed Chamber of Commerce, assumed the responsibility of having the festival at the same time each year.

During the mid-1960s, a branch organization of the Rackensack was created by George Fisher in Little Rock. This branch chapter assembled a large membership in the Little Rock area and followed the traditional guidelines of the Rackensack Society in perpetuating the folk music of the area. Their meetings and concerts were held at the Arkansas Arts Center (now the Arkansas Museum of Fine Arts).

In 1968, the Rackensack Society sponsored a Young Rackensack Club. This was developed and directed by Coleman Gammill, Sue Gammill, and Lester Passmore, teachers in a Mountain View school. The membership of the junior society was made up of elementary and high school students from the three schools in Stone County. These students participated jointly with Rackensack members in concert and also had an annual program consisting only of the Young Rackensack members.

In the spring of 1973, the Ozark Folk Center had its grand opening, with the Rackensack members providing the music. Music programs were scheduled weekly with Jimmy Driftwood as the principal entertainer and emcee. Driftwood was appointed to the State Publicity and Parks Commission and immediately pursued his quest of getting the folk center made a state park. After the folk center became a state park, officers of the Rackensack received notice from the State of Arkansas that the Rackensack would have to enter into a contract with the state if they were to provide the music, but the state could not contract Rackensack since it was a nonprofit organization. A general meeting was called, and Josephine Linker Hart, attorney for Rackensack, reported that the state had recommended that the name Rackensack Folklore Society be changed to Rackensack Incorporated and that members be allowed to buy shares at a fee of twenty dollars each. The membership, by a large majority, voted to go with the state recommendation. This would allow the Rackensack to provide the musical programs, and the performers would receive a small remuneration for their performances.

Driftwood objected and told the membership that Rackensack Incorporation would not be formed, no contract would be made with the State of Arkansas, and the members would not be paid to perform. Governor David Pryor’s office was following the developments and consulted with Driftwood and asked him to reconsider. Driftwood would not change his thinking, and it became necessary for Pryor to remove him from his position at the folk center. Rackensack contracted with the state and provided the musical programs that first season of 1973.

The Rackensack Folklore Society continues to work at bringing together people in the area and providing them with the opportunity to display their music. The Little Rock branch also continues to hold monthly meetings.

For additional information:
“The Creation and Development of the Arkansas Folk Festival and the Ozark Folk Center: An Oral History Project.” Regional Studies Center, Lyon College. 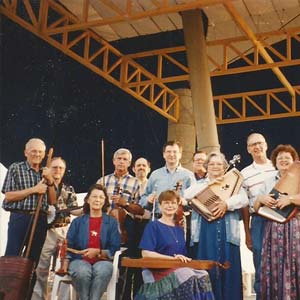