In rural Pulaski County in 1889, three or four men were reportedly lynched for having beaten a prosperous farmer to death while robbing or attempting to rob him. However, the reports surrounding this event are very vague and sometimes contradictory. Although this event is included in many tabulations of lynching victims for the state, there may be reason for doubting whether a lynching actually occurred.

National reports provide the most details about this event. For example, the December 18, 1889, report in the Indianapolis Journal, is one of many similar articles that circulated nationally. On Saturday, December 14, 1889, Henry Wright, described as a “well-to-do farmer,” was on his way to Fletcher’s store in the community of Big Maumelle when he was waylaid by four highwaymen who pulled pistols on him and demanded his money. Not believing that he was without cash, the robbers beat Wright. The unfortunate farmer was found the following morning by neighbors who had gone in search of him, and, “although fatally injured, [Wright] rallied sufficiently to describe his attackers.” The report ends succinctly: “A vigilance committee was at once organized, and the murderers were caught and lynched.” Wright’s attackers are never identified by name or even race, though the assumption, from such reports, is that they were white, given that it would have been noted if they had not been white.

However, there is a report in the December 16, 1889, Arkansas Democrat that reads, “It was reported here this afternoon that an attempt had been made by three negroes to rob a reputable citizen in Maumelle township Saturday night, and that the men had been captured and hanged by the citizens.” When and where, exactly, this lynching occurred is not specified, and the following day, the Democrat contradicted its earlier report thusly: “It turns out that the four Maumelle robbers were not caught and hanged as reported. The county would have suffered no great loss had the report been true. As it is, however, they are at large.” A blurb in the “Local Brevities” column of the December 19, 1889, Arkansas Democrat followed up on this information: “None of the men who assaulted Henry Wright in Maumelle township a few days ago, with the intention of robbing him, have been caught.” With that, the material record of the event seems to come to an end.

Whatever happened, this event illustrates the difficulties of researching lynching, especially given the occasional difference between national and local reports and the lack of substantive details in both. 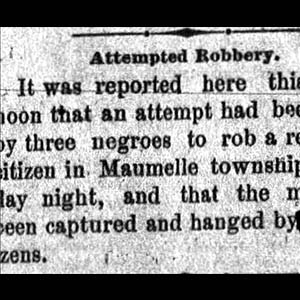