The Pine Bluff National Guard Armory at 623 West Second Avenue in Pine Bluff (Jefferson County) is a single-story, Art Deco–style structure built in 1931–1932. It was listed on the National Register of Historic Places on February 16, 2001.

In 1931, Pine Bluff decided to seek Military Fund financing for a new armory to house its local National Guard unit, Company I, after John Craig and his wife offered to donate a corner lot at Second and Beech Streets for the project. Adjutant General E. L. Compere approved the site in June, and Durward F. Kyle of Pine Bluff, the Military Department’s architect, began designing the building, which the Arkansas Gazette reported “will be 73 by 130 feet, facing on West Second, and will be constructed of brick, concrete, stone and steel.”

Construction began on September 25, 1931, after Pine Bluff contractors Quinn and Quinn were selected for the project, with local funds secured for the construction job until state money would be released in November. Though originally expected to cost $25,000, it ultimately cost $5,000 more. Durward turned the keys to the 9,262-square-foot building over to Captain R. M. Roe of Company I on May 21, 1932, with the Gazette explaining that “the building was completed several weeks ago, but because the fund to pay for the armory buildings was depleted, the contractors could not turn the keys of the building over to Captain Roe.”

National Guard units were based in the Pine Bluff Armory until 1974, when the National Guard sold the building to Ten-Ark, Inc., for $25,101. Arkansas River Education Services Cooperative later acquired the building and used it as classroom space, though it was not in use by 2020. 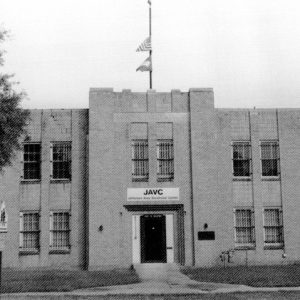