The Physical Education Building, located at 1502 North El Paso Street on the Arkansas Tech University campus in Russellville (Pope County), is a two-story brick building designed in the Classical Revival style of architecture and built in 1937 with assistance from the Public Works Administration (PWA), a Depression-era federal relief agency. It was listed on the National Register of Historic Places on September 10, 1992.

Arkansas Polytechnic College (which later became Arkansas Tech University) had seventeen major buildings, including several dormitories that the U.S. Office of Education deemed “unfit for human habitation,” at the time Joseph W. Hull became the college’s eighth president in January 1932 and embarked on a major building campaign. The college received $135,000 from the PWA in 1934 that financed several new buildings and remodeled several of the decrepit dormitories. In 1936, it applied for funds for a gymnasium and student center.

In November, Arkansas Polytechnic College received a $37,000 loan and $30,272 grant from the PWA for a “combination physical education and student commons building,” which the Arkansas Gazette said “will contain a gymnasium, offices for the directors of physical education, and quarters for the college book store and postoffice [sic].”

Fort Smith’s Haralson & Mott architectural firm was hired to design the new building, and the Manhattan Construction Company built it. The National Register nomination described the design as “a relatively erudite rendition of the Classical Revival” with “the absolutely symmetrical composition of the front façade, the segmental arch windows in the center of the first floor and the pedimented, Classical entrances.” The building was completed by August 1937, and a contest was held to name it, requiring that the word “Tech” be included. Eugene Rowden submitted the name “Techionery,” winning naming rights and a one-dollar prize.

By the early 1990s, the Techionery Building was home to the Arkansas Tech University Museum and the university’s theater department. A 2011 inspection by the Russellville Fire Department determined that the building did not meet fire codes, and so in the spring of 2012 the board of trustees allocated $176,510 to restore the structure, resulting in the removal of twenty-two tons of debris from the building. That September, the board set aside $840,950 to build a 144-seat theater and support facilities in the building. The ATU Museum and Techionery Theatre continue to share the building in the twenty-first century. 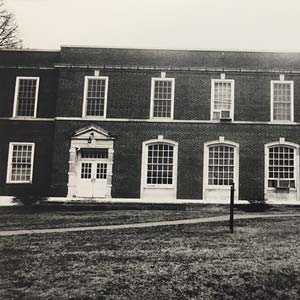