Pauropods belong to the Phylum Arthropoda, Subphylum Labiata, Superclass Myriapoda, and Class Pauropoda. They are small, pale, millipede-like arthropods. There are about 830 species in twelve families worldwide, and they live under rocks in moist soil, leaf mold, and woodland litter. Only a single species, Eurypauropus spinosus, has been reported from Arkansas, but there are likely more that would be uncovered with further research.

The only known fossil pauropod is Eopauropus balticus, a prehistoric species known from mid-Eocene Baltic amber (40 to 35 million years ago). Because pauropods are normally soil-dwelling, their presence in amber (fossilized tree sap) is unusual, and they are the rarest known animals in Baltic amber. They appear to be an old group closely related to the millipedes (Diplopoda). However, they look more similar to centipedes, but strong evidence supports the Symphyla as the sister group of the Pauropoda.

Pauropods are soft, nearly microscopic cylindrical invertebrates with bodies 0.5 to 2.0 mm (0.02 to 0.08 in.) long that are rarely encountered by the casual observer. The first instar has three pairs of legs, but that number increases with each molt so that adult species may have nine to eleven pairs of legs. They are eyeless and have no hearts, although they do have sensory organs that can detect light. Similar to those in millipedes and symphylans, the body segments have ventral tracheal/spiracular pouches forming apodemes, although the trachea usually connected to these structures are absent in most species. They possess long sensory hairs located throughout their body segments. Their head capsules show great similarities to millipedes, as both have three pairs of mouthparts and the genital openings occur in the anterior part of the body. Moreover, both groups have a pupal stage at the end of the embryonic development. Pauropods are usually either pale white or brown.

Pauropods occur in moist soils, usually at densities of less than 100 per square meter (11.0 sq. ft.). They are cautious of light and will attempt to move away from light sources. Pauropods occasionally migrate upward or downward throughout the soil based on moisture levels. The also possess distinctive locomotory patterns characterized by rapid bursts of movement and frequent abrupt changes in direction. Although they cannot burrow, they can follow root canals and crevices in much deeper levels, down to the groundwater surface.

Although the food habits of most species are unknown, pauropods are reported to eat a variety of minute items. Some do eat mold or suck out fungal hyphae; at least one species even eats root hairs. A single species was found feeding on and damaging African violet (Saintpaulia ionantha) cuttings in a greenhouse in the Netherlands.

Little is known of the pauropod species that occur in Arkansas. A single species, Eurypauropus spinosus, has been reported from the state. Specimens were taken from Pinnacle Mountain (Pulaski County) and Mount Nebo State Park (Yell County). There are almost certainly additional Arkansas species, and more work is sorely needed on the group.

———. “First Record of the Genus Ribautiella Brolemann in the Western Hemisphere and Key to the Species of the World (Symphyla: Scolopendrellidae).” Journal of the New York Entomological Society 106 (1998): 199‒208. 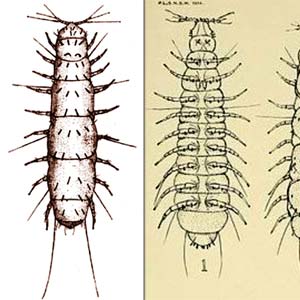