Pamela A. Smith became the first African American woman to head the United States Park Police when she was appointed in 2021. She served for a little over a year before resigning to take a position with the Washington DC Police Department.

Pamela A. Smith was born on January 4, 1968, in Pine Bluff (Jefferson County) to Walter Lee Smith Sr. and Eddie Mae Bass Sanders. Her parents divorced when she was young, and Smith was raised by her mother and her grandmother, Ellatrise Bass. Growing up on the east side of Pine Bluff, she went through the local schools—Forrest Park and Oak Park Elementary Schools, Southeast Middle School, and Dial Junior High School—before graduating from Pine Bluff High School, where she ran track.

She then went to the University of Arkansas at Pine Bluff (UAPB), where she continued to run track, initially making the team as a walk-on, but ultimately earning All-American honors. She received her bachelor’s degree in education from UAPB in 1992. She also earned a graduate certificate in Criminal Justice Education from the University of Virginia. In addition, she was a graduate of the Federal Bureau of Investigation (FBI) National Academy.

Smith began her law enforcement career in 1998, including a stint at the Federal Law Enforcement Training Center, where she served as a patrol officer, field training officer, canine handler, and academy instructor. She also served in Park Police field offices across the country with postings in New York, where she was the first female commander of the field office, and San Francisco, where she was executive lieutenant to the chief of police and assistant commander. She also served in Georgia and Washington DC.

Smith served as acting deputy chief of the Homeland Security Division and deputy chief for the Field Operations Division. She was promoted to sergeant in 2009, and her career was a steady rise through the ranks until she was named acting chief in late 2020, a position that meant she was in charge when her staff had to defend the U.S. Capitol during the January 6, 2021, insurrection. She later testified before the U.S. Senate about the events of the day. In February 2021, after a nationwide search, she was named chief, becoming the first Black woman to hold the post.

Assuming the job amidst numerous challenges, she made a public commitment to increase accountability by having officers use body cameras. She announced a self-imposed deadline for starting the body camera rollout of ninety days, a goal she later said was achieved.

By all accounts, in taking over the over 600-member force, Smith took the helm of a troubled department. Shortly before she assumed her position, the U.S. Department of the Interior’s inspector general issued a damning report on the state of the Park Police’s dispatch center in southeastern Washington DC, asserting that it was a problem that had been ignored for years. Personnel was also an issue, with the Park Police having seen significant cutbacks in staff levels. Indeed, shortly before Smith’s appointment, Park Police officers had filed a grievance charging that the Park Service was “engaged in gross negligence and mismanagement at great risk to the safety of the public due to understaffing of sworn personnel.” Smith’s early efforts to address the staffing problems met with opposition, with officers charging that she had canceled certain days off to fill the massive holes and ensure minimum law enforcement coverage. That was followed by another grievance that asserted that the previously cited concerns had put officers in danger. At the same time, the grievance noted that the Interior Department and the National Park Service did not give Smith the tools she needed to do her job.

Smith suddenly resigned in April 2022. Barely a month later, it was announced that she had been named the chief equity officer of the Washington DC Metropolitan Police Department.

In her new position, Smith assumed leadership of the department’s diversity, equity, and inclusion (DEI) efforts. In that role, she undertook the responsibility for ensuring that DEI issues remained a priority in the department while also providing an organizational channel for department-wide accountability. In addition, she also began offering strategic advice to the department’s leadership team on DEI-related matters as well as coordinating DEI initiatives across the department.

Over the course of her twenty-four years with the Park Police, Smith earned many awards and recognitions, including the Women in Federal Law Enforcement Public Service Award and the Northeast Region Equal Employment Opportunity Office Recognition of Outstanding Excellence. Smith was also the recipient of the National Council of Negro Women Award for Working Together in Unity. She is a member of the National Organization of Black Law Enforcement Executives as well as the International Association of Chiefs of Police. 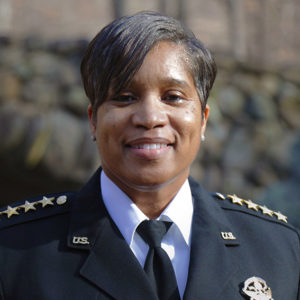