A ninety-six-page joke book, On a Slow Train Through Arkansaw gained wide popularity upon its publication in 1903 and eventually became the bestselling joke book in American history. Subtitled “funny railroad stories—stories of the Southern darkies—all the best minstrel jokes of the day,” the book includes puns, some tall tales, and the prevalent racial and gender stereotypes of its day. The author, Thomas W. Jackson (1867–1934), was a train brakeman for the Oregon Railroad and Navigation Company who collected stories and jokes he heard on his travels; as he had injured his hand in an accident and was not able to write, his wife wrote his stories down for the book.

Published in Chicago, the book was sold by “train butchers,” boys who hawked items to train passengers, for twenty-five cents a copy. The book gained wide popularity with millions of passengers headed to the 1904 World’s Fair in St. Louis, becoming a bestseller on all trains. Beginning with its opening line—“You are not the only pebble on the beach for there is a Little Rock down in Arkansas”—the book presents gags, vaudeville routines, and, of course, tales of slow trains. One train, for example, was reputed to make so many stops that a passenger decided to commit suicide: “He ran ahead for half a mile, laid down on the track, but he starved to death before the train got there.” The slow train motif was already popular in American literature. Mark Twain is credited with the first slow train joke, which appeared in The Gilded Age (1873): a mail train had never run over a cow because it had “never been able to overtake one.” Indeed, some Arkansas trains were slow: locals referred to the Missouri and North Arkansas Railroad as the M&NA, or just the MNA, and some joked that the letters actually stood for “May-Never-Arrive.”

While train passengers were often amused by Jackson’s book, some Arkansans objected to its portrayal of Arkansas. The use of the slow train image suggested that not only the trains but also the Arkansas people themselves were slow, backwards, without progress or industry. In 1909, Arkansas writer Bernie Babcock published a pamphlet titled The Man Who Lied on Arkansas and What Got Him. Her targets were Jackson, his book, and other imitative books, such as George D. Beason’s I Blew in from Arkansaw (1908) and Andrew Guy Chilton’s Through Arkansas on the Hog (1908). But Jackson’s title continued to gain fame. In 1925, country singers Vernon Dalhart and Al Bernard recorded a song using the same title. In 1941, Thomas Hart Benton created a lithograph titled “On a Slow Train Through Arkansas,” in which he depicted a train stopped while a trainman clears the tracks of cartoonish and underfed local cows.

Even though Jackson’s book includes material from states other than Arkansas, its title and its widespread distribution forever linked the book with the state. Jackson published twelve similar joke books before he died in 1934. Many of these, along with Slow Train, were pocket-sized books carried by soldiers in World War I and World War II. By 1950, On a Slow Train Through Arkansaw had sold seven million copies.

For additional information:
Brittle, David. “Corn By the Carload.” In A Treasury of Railroad Folklore, edited by Benjamin A. Botkin and Alvin F. Harlow. New York: Bonanza Books, 1953. 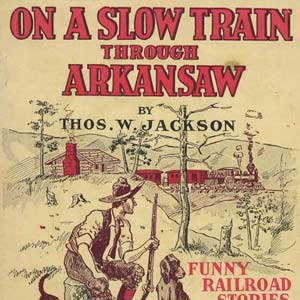