Early residents of Randolph County settled in the Ozark Plateau area of the county. While many of these communities are gone, remnants of their existence can be seen. For the Birdell (Randolph County) community, the Old Union School survives as an example of the early history of this once thriving community. Located approximately two miles northwest of the community, the school is a prime example of what early education looked like in rural Arkansas.

The early community of Birdell constructed a hewn-log school out of material readily available, which was a common building technique in early Arkansas. It is believed that the original school was built sometime prior to the Civil War.

This school burned in 1910, and classes were held in the nearby residence of Mattie Maxwell until the new schoolhouse—built on the same site—was finished in 1913. William C. Campbell, Jim and Frank Pettyjohn, and others of the community assisted in the construction. The new schoolhouse reflected improved sawmilling, with 2″ x 4″ lumber covered by weather board.

The Old Union School held classes through the eighth grade for the area’s white school children. The school’s session reflected the lives of rural farm families. Lucille Hufstedler, a student of the Old Union School, recounted that the school year began on the first Monday of July and continued until the second week in September so that students could help their families pick cotton and perform other farm tasks. The school term reopened in mid-November, and classes were taught until March, when the children were again let out of school to help their families plant crops.

The building was primarily employed as a school but also served other community functions. It hosted a temporary church where funerals were also held; there is a small cemetery adjacent to the school building.

In 1941, the Old Union School ceased classes, as the school was consolidated with the Sloan-Hendrix School District in Imboden (Lawrence County). After the school closed, the building accommodated Home Demonstration Extension Service meetings, occasional club meetings, and school reunions. The structure deteriorated substantially over the years. In 1991, the building was rehabilitated in a community effort to preserve the schoolhouse.

While one-room schoolhouses were once found throughout Arkansas, few examples exist today. The Old Union School is the only wood-framed, one-room schoolhouse remaining in that region of Randolph County. Other examples—the one-room schools at Hubble Creek, Water Valley, Fairview, and the African-American school at Birdell—have either been destroyed or have deteriorated beyond repair. The Old Union School was listed on the National Register of Historic Places on November 12, 1993, and is now used as a community building. 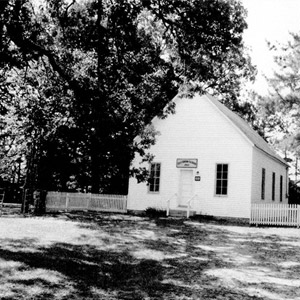