Settled in the early 1820s, what is now called Old Austin, located about thirty miles northeast of Little Rock (Pulaski County), was one of central Arkansas’s early settlements. Local folklore holds that Old Austin narrowly missed being the state capital. Once a thriving town, it experienced a decline after being bypassed by the railroad in the late 1800s. Today, it serves as a bedroom community of Cabot (Lonoke County) and nearby towns.

The first settlers, among them James Erwin, came to the area in 1822. Before the founding of a town, the settlement at various times was called Oakland Grove, Oakland, Saundersville, and Atlanta. In 1848, Isaac Dunaway and Colbert Moore built the settlement’s first store. Growth was enhanced by the construction of a road that connected the area to the White River in Des Arc (Prairie County). For a brief time, the settlement was a stop on the Butterfield Overland Mail Company  stage line. Gabriel Conner and O. Chism opened the second store in 1852 and, six years later, began operation of the area’s first flour mill. A post office named Oakland was established in 1855. In 1858, G. A. Skiliern and Associates purchased approximately 800 acres near the settlement to establish a town. The land was surveyed into blocks, and the new town was named Austin. It was said to have been named in honor of an early settler. By the time of the Civil War, the town consisted of about thirty residences, several dry goods stores, a grocery, a school, three doctors, a saddler, a tailor, three saloons, a hotel, a sawmill, a cotton gin, and a wool carding factory.

Many of the area’s early settlers were Baptist. A church is believed to have been formed in the 1830s and, by 1857, was called Austin Church. The town became a leader in the Baptist faith, and the Caroline Baptist Association was formed with headquarters in Austin in 1853. A Methodist congregation was also established before the Civil War, and, during the war, that church building was used as a Union hospital. The Reverend James Moore, sometimes called the “Father of Arkansas Presbyterianism,” established the Austin Academy in 1844. Around 1850, a subscription school was built.

When the Civil War erupted in 1861, many of the men of Austin joined the Confederate cause, enlisting in the Austin Rifles, a company commanded by Andrew J. Gingles. Mustered into service that summer at Brownsville (Lonoke County), it became Company I of the Fifth Arkansas Infantry Regiment. While no major battles were fought near Austin, a large Confederate camp named Camp Nelson was located nearby in 1862. Both armies moved through the area. Union forces tore down many of the buildings, using the materials to construct winter quarters. When John D. Dunaway returned after the war, he stated that the “little town of Austin had been destroyed and there was no business of any kind…gloom was depicted in every face.”

The town slowly began to recover after the war. In 1872, George Murrell opened what would become an award-winning plant nursery, the Austin Nursery, about one and a half miles west of town. In 1879, a newspaper, The Triumph, was founded by T. T. Pitts. It remained in publication only a couple of years. There was great expectation of growth when construction on the St. Louis, Iron Mountain and Southern Railroad began in the area, but the tracks were constructed about one mile southeast. Local tradition holds that a farmer had refused to sell the railroad the right of way through his farm. People began to build along the new tracks, with some Austin buildings being dismantled and rebuilt along the tracks. By 1900, the new town, Austin Station, had grown to almost 200 citizens. Eventually, Austin was called Old Austin to distinguish it from Austin Station, which came to simply bear the name of Austin.

Old Austin began a slow, steady decline. A brief moment of hope for growth came in 1886 when the town was one of eight that made a presentation to state Baptists who were seeking a site for Ouachita Baptist College (now Ouachita Baptist University). It was described as a “formidable competitor,” but chances were remote due to the fact that Little Rock was also in competition for a central Arkansas site. The southern Arkansas town of Arkadelphia (Clark County), where the school is still located, was chosen. Within a short time, only the school, one store, the blacksmith, two cemeteries, and a few houses remained in Old Austin. As of 2010, the town has only one store and serves as a bedroom community to nearby Cabot. All that remains of the old town is the antebellum Sears House, which was placed on the National Register of Historic Places in 1992, and the cemetery. 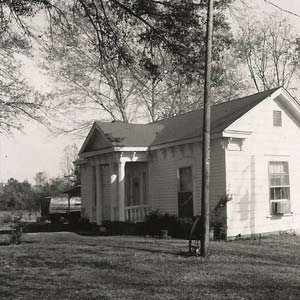