The New Edinburg Commercial Historic District includes a number of former stores and other businesses located on both sides of Arkansas Highway 8 in New Edinburg (Cleveland County). The district contains a total of eleven buildings constructed between 1898 and 1948, ten of which are contributing. The district was added to the National Register of Historic Places on October 22, 2001.

The area around New Edinburg began to be settled in the early to mid-1830s. Early public buildings in the area included a church constructed in 1838 and a Masonic lodge in 1854. Development of the area paused during the Civil War, and the Action at Marks’ Mills occurred just to the northwest of the community. After the end of the conflict, businesses began to open in the community, with a post office beginning operations in 1876 and other business such as a drugstore and a general store opening in New Edinburg. A rail spur linking the community with the Cotton Belt Railroad opened in the 1880s.

The oldest building in the historic district is the New Edinburg Hotel, constructed in 1898. The two-story building, originally constructed next to the road that became Highway 8, included a two-story front porch and an ell to the rear. Around 1915, the house was moved back fifty feet to put more distance between the structure and the road.

The Stewart Cash Store is located northwest of the hotel. The construction date for the original building is unknown, but an addition was constructed around 1934. The original building operated as a post office, and owners Leslie and Florene Stewart moved this structure away from the highway when Florene retired as postmaster in 1934. The Stewarts operated a store after constructing an addition that included a single room and car canopy to the front of the original building. Selling general merchandise and gasoline, the store remained in operation until around 1975.

Constructed around 1920, the Hamaker-Hearnsberger Store is located to the northwest of the Stewart Cash Store. Including a car canopy, the building rests on brick piers and is covered with a tin roof. First operated by the Hamaker family, the business was purchased around 1950 by the Hearnsbergers, who sold a variety of food and hardware items while also selling hot lunch items. To the northwest is the Cathey Café and Barbershop, constructed around 1928. It is a non-contributing structure to the district, due to a façade added around 2000; it housed the only café located in the community for years and included a barbershop in the rear.

Continuing to the northwest, the Parham Store dates to around 1920. Topped with a metal roof and resting on concrete piers, the store (fronted by a car canopy) sold a variety of goods, including gasoline, over the years. A metal addition is located on the rear of the building. The Parrot Building located to the northwest is likely the oldest structure in the district, constructed around 1900. Originally used as a Methodist church, the building was moved to its present location during the first decade of the twentieth century. Resting on a brick pier foundation and topped with a metal roof, the building later housed a grocery store.

Other structures in the district are located on the opposite side of the highway. The Smith Service Garage, constructed around 1940, houses the local volunteer fire department. The metal barn-like building has little ornamentation. To the southeast of the garage is the only non-commercial building in the district. Constructed around 1948, the Gill residence is a rectangular frame home covered with buff brick. It is fronted by a stoop and was still occupied by 2019.

The final building in the district is the Lash Store. Constructed around 1920, the store sold general merchandise, and an addition built on the rear of the building in 1945 served as a movie theater. The store operated until around 1950, and the addition was removed in 1994. The weatherboard building is topped with a metal roof and rests on piers.

While little commercial activity occurs in New Edinburg in the twenty-first century, the district is a good example of the impact small towns had on the state economy early in the twentieth century. 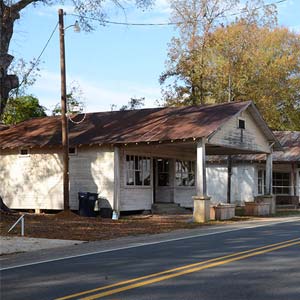