John Cooper Sr. built three retirement/recreation villages in Arkansas from the 1950s to the 1970s, including Bella Vista Village in northwestern Arkansas, which he opened in 1965. His wife, Mildred Borum Cooper, was his partner throughout these and other ventures. She, too, was successful in business, serving as postmistress in West Memphis (Crittenden County) and Cherokee Village (Sharp and Fulton counties) and owning gift shops in Cherokee Village and Bella Vista. She was also active in many church and community organizations.

Mildred Borum was a native of Earle (Crittenden County), born in 1906. In 1937, as the widowed mother of two small daughters, Ann and Boyce, she married John Cooper. They subsequently had two children of their own, John Jr. and Rebecca. Mildred B. Cooper died in December 1983. Following her death, a Cooper family entity was set up, with daughter Ann Basore as president, and the decision was made to build a chapel as a memorial. The family hired architects Jones and Jennings of Fayetteville (Washington County) and chose a scenic eight-acre site on top of a wooded hillside that is bounded on two sides by Lake Norwood above Town Center in Bella Vista.

Ownership of the land was transferred from Cooper Communities by warranty deed on December 19, 1985, and work on the project began soon thereafter. Jones used a similar design to that of Thorncrown Chapel, which had opened in 1980. The chapel is constructed around fifteen main arches towering fifty feet high. It was built using thirty-one tons of steel and 4,460 square feet of glass. It is approximately twenty-four feet wide by sixty-five feet long, with a seating capacity of 120. Visitors have a clear view of the surrounding woods and, in the wintertime, a view of Lake Norwood below. A wide concrete pathway also completely encircles the property. It cost just over $1 million to build and furnish.

The first event at the chapel was a wedding held on February 27, 1988, and the chapel was officially dedicated on April 2, 1988. The chapel is owned and operated by the Mildred B. Cooper Memorial Chapel, Inc. A full-time on-site director reports to the board and works from a separate small office building, down the hill from the chapel. The chapel is non-denominational, and is open to the public at no charge seven days a week, 9:00 a.m. to 5:00 p.m., unless closed for a special event, such as weddings, renewals of vows, concerts, cultural events, baptisms, or memorial services. No church services are held there. Maintenance and upkeep are funded entirely through private contributions, which are tax deductible. 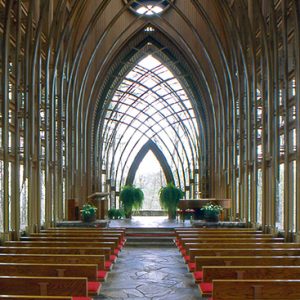