The Maumelle River Bridge formerly carried Arkansas Highway 300 over the Maumelle River, approximately half a mile southwest of the town of Natural Steps (Pulaski County), before the highway was relocated. However, the bridge remains a part of the Ouachita National Recreation Trail and was listed on the National Register of Historic Places on January 21, 2020.

The Maumelle River Bridge is an example of a Pratt through truss, which is a type of bridge developed by Caleb Pratt in 1844. Pratt truss bridges are characterized by diagonals in tension and verticals in compression. The through truss is designed to carry the traffic load with the bridge’s bottom chords or beams. The Maumelle River Bridge is a riveted seven-panel Pratt through truss, with two approach spans of approximately twenty feet each supporting a central overhead truss of 130 feet, bringing the total length of the structure to about 170 feet. The bridge is supported by cast-concrete piers and abutments. The traffic deck is concrete.

After construction, the Maumelle River Bridge was used as part of a county road, until the road was designated Highway 300 in 1964. When Highway 300 was relocated in 1981, with a new bridge constructed nearby, the Maumelle River Bridge ceased to be used for regular vehicular traffic. As a result of the decline in traffic, the area surrounding the bridge and the bridge itself were gradually reclaimed by nature.

The bridge has retained its original design and materials. Although no longer in use for vehicular traffic, it is still used for pedestrian travel. The bridge has been incorporated by Pinnacle Mountain State Park as a part of the Ouachita Trail. The Maumelle River Bridge is the last remaining intact example of a Pratt through-truss bridge remaining in Pulaski County and is an intact example of a truss-style bridge. 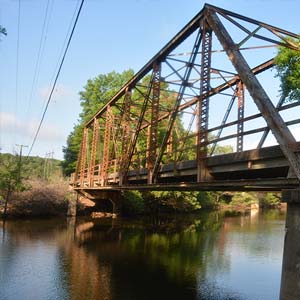