On September 8, 1884 (some papers give the date as September 9), a white man named Mat Orton was lynched in Arkansas City (Desha County) for allegedly setting a fire that destroyed many of the town’s businesses.

There is some information about Mat Orton in newspaper accounts and public records. In 1880, he was thirty-three years old and was living in Arkansas City and working as a carpenter. He married Margaret McCoy there on March 14, 1882. An article in the Arkansas Gazette on May 16, 1883, indicates that Orton was a deputy sheriff and was sent to retrieve R. H. Costello (sometimes called Castelio, although census records list him as Costelo), who was wanted in Desha County for the murder of his uncle, R. C. Costello, in August 1882. A rather sensational article in the New York Sun, however, gives quite a different picture of Orton, describing him as “a desperate man, who has long defied punishment.…He was the leader of a gang of desperadoes who have made themselves the terror of the inhabitants along the Mississippi River for miles around the thriving young city they have now tried to burn to the ground.”

On September 9, the Arkansas Gazette published an article describing the fire. Apparently, it was discovered at 3:20 a.m. on September 8, and “consumed the principal business block of the city.” Undoubtedly the result of arson, the fire started in a vacant store and eventually destroyed $60,000 worth of property, only twenty percent of which was insured. Citizens managed to save only the grain elevator. According to the Gazette, Orton had been arrested pending a hearing. The Gazette wrote, “Excitement naturally runs high, and there is no little feeling manifested.” In a follow-up article from Arkansas City published on the same page, the Gazette reported that the “incendiary” had been taken by a “vigilante committee” the same day, and “he is doubtless hanging in a limb ere now. Your correspondent is in bed.

On September 10, the Gazette provided further details. Orton was taken from jail at 8:30 on the evening of September 8, “and a short time thereafter his lifeless body was hanging from a tree near the court house.” An inquest, held around midnight that same night, found that Orton had died “from hanging by unknown parties.” In response to the incident, the residents of Arkansas City organized a committee of safety, with a sub-committee intended to “assist the officers in the proper enforcement of the law…there will hardly be another call for the repetition of the scenes of last night.” The previously mentioned article in the Sun provides a possible reason for the committee’s organization, reporting that “Orton…left valuable information against his associates which the committee of safety…will use to rid the community of their future depredations.” The Gazette’s correspondent noted: “There is no political feeling in our troubles, and as an evidence of that fact two of our prominent colored citizens, S. L. Hall and J. P. Jones, were present today and were elected members of the committee of 13. Both of these gentlemen are staunch [R]epublicans, Jones having been county clerk and the acknowledged leader of his party for the last eight years.”

The store where the fire originated belonged to the Lowman brothers. The Lowmans had an interesting history in Arkansas City. According to an 1887 report in the Fort Worth Daily Gazette, John W. Lowman and his brother, M. H. Lowman, settled in Arkansas City in 1877 and went into business. In 1880, there were four Lowman (or Lowmon) brothers, all born in Illinois, living together in Arkansas City. The eldest, M. H. Lowman, was thirty-four and was heading a household made up of J. W. (age thirty-two), J. C. (age thirty), and S. M. (age twenty-one), all working in the mercantile business. The brothers were very successful, but J. W. and M. H. later relayed that “while they were accumulating a fortune, they encountered bitter hostility from less fortunate rivals and were, as they allege, threatened with future disaster.” The Daily Gazette reported that their business had experienced fires once in 1881 and twice in 1884. According to the Arkansas Gazette, the brothers were accused of setting the first 1884 fire, which happened in January. On May 29, warrants were sworn out accusing them of “having set fire to a house adjoining their store.” The second fire was attributed to Mathew Orton. Two African Americans signed an affidavit blaming Orton for the fire, but he reportedly proclaimed his innocence, and it was later alleged that he was hired by the Lowmans to set the fire. Nonetheless, he was lynched for the crime. The 1887 article in the Fort Worth Daily Gazette indicates that the committee of safety demanded that the Lowman brothers leave Arkansas City, but their brother was Sheriff Sam Lowman, and he “placed a posse at their disposal for guards,” after which they “lived in constant terror of assassination.” They finally relocated just across the river in Mississippi.

The case remained in the news for several years. As reported by the Fort Worth Daily Gazette in 1887, the Lowman brothers eventually filed a suit against J. R. Ross et al. protesting their 1884 arrest and the activities of the Committee of Safety. 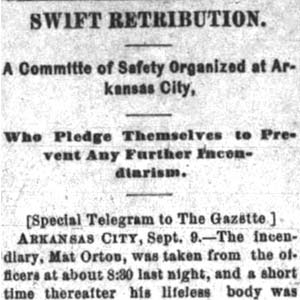