Mary Burnett Talbert was a leading African American civil rights and anti-lynching activist who also served as an educator, a nurse, and a historic preservationist.

Mary Burnett was born on September 17, 1866, in Oberlin, Ohio, to Cornelius Burnett and Carolyn Nichols Burnett. As the only African American woman in her 1886 graduating class, she received a BA from Oberlin College, one of the few integrated coeducational colleges in the country.

After graduating from Oberlin, she moved to Arkansas, where she taught at Bethel Institute (now Shorter College) in Little Rock (Pulaski County). She soon became the assistant principal of Union High School in Little Rock, making her the highest-ranking Black woman in the state in the education professions. In 1891, she married William H. Talbert, a California native. The couple moved to Buffalo, New York, where their only child, Sarah May, was born in 1892.

Once settled in Buffalo, Mary Talbert became active in the city’s civic life. In 1899, she was a founding member of the Phyllis Wheatley Club of Colored Women, an organization that represented the city’s first affiliate of the National Association of Colored Women’s Clubs (NACWC), engaging in both service activities and efforts to enhance the life of the city’s Black citizens. Talbert would long be involved with the NACWC, serving in a number of positions, culminating in a stint as president from 1916 to 1920.

Meanwhile, in 1900, the group organized a protest rally aimed at getting the Board of Managers of the upcoming Pan American Exposition to include a “Negro Exhibit,” one that would highlight the achievements of the nation’s Black citizens. Led by Talbert, the organization also lobbied for the appointment of a Black commissioner to represent the interests of the city’s Black residents. Talbert became a renowned orator, speaking to audiences of all kinds over the course of numerous national and international lecture tours, which allowed her to further the various causes with which she was involved.

Talbert continued her civil rights advocacy in 1905, when her home was the site for a meeting that launched the Niagara Movement, an organization whose membership was limited to men (its initial meeting at her house notwithstanding). However, while its existence was short-lived, it proved to be the forerunner of the National Association for the Advancement of Colored People (NAACP), which was founded in 1909 and in which Talbert was welcomed. In 1910, she was a co-founder of the first Buffalo chapter, an act that was the beginning of a long and influential involvement with the organization. Talbert became a member of the NAACP’s board in 1919, as well as serving as vice president from 1919 until her death in 1923. She also served as the national director of the organization’s anti-lynching campaign in 1921. In 1922, she became the first woman to be awarded the prestigious Spingarn Medal, the NAACP’s highest honor.

Talbert served as a nurse with the Red Cross as well as the YMCA secretary in France during World War I. There, she also offered classes to Black soldiers. In addition, she served on the Women’s Committee of National Defense. Following the war, she was a member of the Women’s Committee on International Relations, a group that nominated women for positions in the League of Nations.

In 1920, she represented the NACWC, becoming the first Black delegate to the International Council of Women at its fifth Congress in Norway. While she was in Europe, she also delivered a number of lectures on race relations and women’s rights.

Mary Talbert’s work with the NAACP helped make her a leader in the effort to mobilize Black women in support of the Nineteenth Amendment and voting rights. She believed that race and gender could serve as unifying factors in the effort to end the discrimination that women, and especially Black women, faced in the United States at that time. Ultimately, helped by Talbert’s efforts, Black women came together in support of women’s right to vote, even though the ratification of the Nineteenth Amendment, at least initially, did little to further the right to vote that the Fifteenth Amendment had given Black men after the Civil War. Despite her efforts, however, the National Woman’s Party rejected her as a speaker for its 1921 conference, explaining that they were not interested in promoting a “race” organization.

Talbert was also a pioneer in the field of historic preservation and was instrumental in saving the Washington DC home of abolitionist Frederick Douglass. Notably, Buffalo’s Michigan Avenue Baptist Church, to which Talbert and her family belonged and where many of the city’s prominent Black residents worshipped, has been included on the National Register of Historic Places.

Talbert died on October 15, 1923, and is interred in Forest Lawn and Garden Mausoleum in Buffalo. In 2005, Talbert was inducted into the National Women’s Hall of Fame. 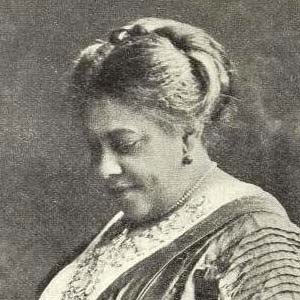