Marion Harland Crank was a member of the Arkansas General Assembly for eighteen years; he lost narrowly to Governor Winthrop Rockefeller in 1968 in his only race for statewide office. Crank’s defeat ended conservative dominance of the Democratic Party in Arkansas. A government agriculture specialist, farmer, teacher, and businessman, Crank became influential in the dominant rural faction of legislators when he entered the state House of Representatives in 1951. He was the speaker of the House in 1963–64 and often managed legislative programs for Governor Orval E. Faubus during Faubus’s twelve years in office. He was the choice of the old political organization of conservative businessmen and planters to oppose the Republican Rockefeller for a second term, defeating five Democrats to get the party’s nomination. Aided by a large registration of African-American voters and an expensive advertising campaign, Rockefeller defeated Crank with 52.3 percent of the votes.

Marion Crank was born on February 18, 1915, in the farming and timber-harvesting community of Bearden (Ouachita County), one of eight children of Julius Walrath Crank and Mary Jane Hughes Crank. When he was two, his family moved to Muskogee, Oklahoma, where his father became an engineer on the Katy railroad (the Kansas-Missouri-Texas Railroad). He graduated from Oklahoma Agricultural and Mechanical University (now Oklahoma State University) at Stillwater and began working for the Farmers Home Administration regional office in Dallas, Texas, as chief of property control. He married Mary Pauline “Polly” Yauger of Foreman (Little River County) in 1940. Three years later, they moved into the house where she was born, and he took a job as the county’s soil conservationist.

At the end of World War II, the United Nations Relief and Rehabilitation Administration asked Crank to perform relief work in the stricken agricultural region around Hankou in central China, providing food, seed, and tools, as well as advising farmers on irrigation and soil conservation. When communist guerrillas overran the region in 1948, Crank left with the rest of the UN administration and returned to Foreman, where the Cranks reared their four children. Crank taught veterans and started a mercantile business.

In 1950, he ran unopposed for the state House of Representatives from Little River County. The first day of the legislative session in 1951 was the first time he had been in the Arkansas State Capitol.

Serious, unsmiling, a careful speaker, and a student of government, Crank quickly became an influence in the chamber and a leader of the rural forces. When Congress referred a constitutional amendment to the states that allowed people in the District of Columbia to cast votes for presidential electors, Crank rose in the House in January 1961 to oppose it. He said it would lead to statehood and full participation in Congress for Washington DC. Although Governor Faubus implied support for the amendment, Crank prevailed, 59–26. Arkansas was the only state to reject the amendment outright, although New Hampshire voted for the amendment and rescinded the vote the same day.

In 1957, Crank and others introduced a bill drawn by Arkansas Louisiana Gas Company (Arkla) that reversed a ruling by the Arkansas Supreme Court the previous day invalidating a retail pricing formula for natural gas that the gas company produced from its own wells. The bill allowed the company to pass on to its customers the “fair field price” of gas that it produced. The bill passed and was signed into law in three days, greatly increasing Arkla’s profitability. Wilton R. “Witt” Stephens was president and chief executive officer of the company.

In 1958, the gas company opened a cement-making operation at Foreman called Arkansas Cement Corporation. Crank became its public relations consultant and then served as vice president for twenty years. It was later sold to Ash Grove Cement Company.

Crank and Representative John P. Bethel of Des Arc (Prairie County) tied for the speakership in a roll call of House members in January 1961. Faubus, who liked both men, flipped a coin, and Bethel became the speaker. The House chose Crank for the job for 1963–64.

Faubus did not run again in 1966 after six terms, and Rockefeller was elected, the first Republican governor since Reconstruction. Backed by Stephens and the political organization behind Faubus, Crank ran two years later. His chief opponents in the Democratic primary were Virginia Johnson, who was the wife of former Supreme Court justice James D. (Jim) Johnson, the arch-segregationist who had lost to Rockefeller in 1966, and Ted Boswell, who was a liberal trial lawyer. Crank easily defeated Virginia Johnson in a runoff.

An aide of Boswell tipped an Arkansas Gazette reporter that Crank’s family members were on the payroll when he was speaker, but the newspaper did not research the tip and publish the story until after the primaries. (It was common for legislators, who were paid $1,200 a year, to have spouses on the payroll and for children to be paid as pages.) Rockefeller’s polls showed him trailing Crank before the nepotism story broke. A few days later, the Gazette reported that the Democratic nominee for lieutenant governor, Representative Bill G. Wells of Hermitage (Bradley County), also had his three children on the House payroll; Wells’s four-year-old son picked up $88 a week, while his six-year-old brother earned $112 a week. Attempting to defend himself against charges of nepotism, Crank said that he could not afford to send his children to school in Switzerland, as Rockefeller had done, and recited a litany of nepotism in the Rockefeller administration. Rockefeller won by almost 30,000 votes, although a poll showed that the majority of registered voters considered themselves Democrats.

Democrats regained the statehouse two years later and dominated statewide elections for the next twenty-four years, but with a new breed of progressives. “The group I represented had been in office for a long time, and people were ready for a change,” Crank explained years later.

The Arkansas election was famous for what was widely characterized as the “schizophrenia” of Arkansas voters. The voters elected a liberal Republican governor and an internationalist Democratic senator (J. William Fulbright), and gave their electoral votes for president to a segregationist American Party leader, former Alabama governor George C. Wallace, although Wallace received only a plurality.

Crank never sought another office. He became vice president of the cement company and raised cattle. He died December 19, 1994, five days after Faubus died. He is buried in Holy Cross Cemetery in Foreman. 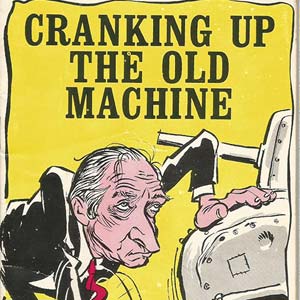