On September 27, 1868, an African-American man named Lee Morrison (sometimes referred to as Morsen or Morson) was lynched near Helena (Phillips County) in retaliation for a number of murders he was presumed to have committed, including that of deputy sheriff Joseph W. Maxey, and the wounding of Sheriff Bart Y. Turner the previous March.

There is no information on Lee Morrison or anyone of a similar name available in public records. Sheriff Turner, born around 1840 in Tennessee, had been in Phillips County since at least 1860, when he was living in Big Creek Township. Joseph W. Maxey had been in the county since at least 1850, when he was working as a druggist and living in the household of Edward H. Cowley. In 1854, he married E. M. Ward in Phillips County. In 1860, he was living with his wife and a one-year-old son in Spring Hill Township.

Morrison’s reported attack on Turner took place during the elect ion to ratify the state’s new constitution in March 1868. At the time, Arkansas was under a military government, and the constitutional convention in January and February was dominated by Radical Republicans, among them African Americans. Morrison was described by the Arkansas Gazette as “a noble freedman of the pure radical type” who had “the blood of three murdered victims on his guilty head, and one of these spilled as recently as two days ago.” (The newspaper, however, does not specify any supporting details.) Morrison reportedly went to the polls and voted, where he was noticed by Sheriff Turner. When Turner moved to arrest Morrison, Morrison shot Turner and then escaped on Turner’s mount. He was reportedly aided in his escape by African-American women at the polls, who, after hearing the shot, claimed that an African American had been shot by a white man. The women then tried to start a riot, and the resulting confusion allowed Morrison to escape.

A posse under the command of Deputy Sheriff Maxey pursued Morrison and cornered him in the nearby hills. Morrison fired on members of the posse, wounding a man named Sebastian, and according to the Nashville Union and Dispatch, the posse held Morrison at bay until a squad of soldiers arrived, apprehending Morrison and severely wounding him in the process. Morrison was then carried back to Helena. According to the Gazette, by early June, Sheriff Turner had recovered from his wounds and was “ at his post in court, courteous, but firm and impartial a model sheriff.”

The Arkansas Gazette first reported on the lynching on September 29, in a brief article indicating that deputy sheriff Maxey had been killed and two other officers had been wounded near Helena as they were “attempting to arrest the notorious murderer, Lee Morrison, colored. Morrison afterwards was captured and hung, the whites and blacks present sanctioning it. All quiet this morning.” Three days later, a fuller account appeared in Tennessee’s Pulaski Citizen. According to the Citizen, Morrison had recently “knocked his jailor in the head and escaped to the hills, where he has been a terror to white and black.” When Maxey learned that Morrison (here identified as Morson) was hiding nearby, he took a posse to the house where Morrison was hiding. According to an article published on October 10 in the Little Rock Morning Republican, the men decided to wait until morning to try to capture Morrison (again identified as Morson). Deputy Sheriff Maxey then called to the people in the house, demanding that they surrender Morrison. A voice, which they recognized as Morrison’s, called out that Morrison did not live there. Realizing he had been recognized, Morrison opened the door pretending to surrender, but then fired “the contents of a large Navy pistol” at Maxey, killing him. He then wounded a policeman named Burress, and two other people in the posse: Pery Nagle and W. McMahon. Morrison himself, although wounded three times, fled into the woods. There, he was captured by the authorities, but “an enfuriated [sic] populace, black and white, hearing of the murder of an esteemed gentleman and a gallant officer” hastened to the spot, taking him from officers’ custody. Before the lynching, members of the crowd, composed of fifty to seventy-five people, voted, and only two voted not to lynch him. He was then hanged from a nearby tree. According to the Republican, “The demon glared in his eyes in the last moment, and when asked whether he would be hung or shot, replied that it made no difference with him. He died without a single expression of regret for the bloody deeds he had committed.”

Civil Rights and Social Change
Civil War through Reconstruction, 1861 through 1874 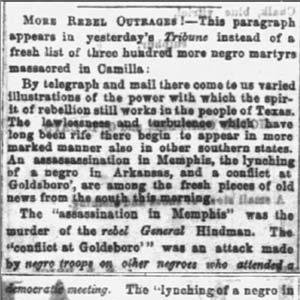