A group of men lynched a white man named Lebow (also spelled as Lebo), described as a “villain, murderer and horse-thief,” in Polk County in August 1877, apparently ending a series of crimes by which he had terrorized the area.

The Fort Smith Independent reported on August 8, 1877, that “an old man named Lebow was hung by a party of men last week in Polk County, for foully murdering two men who were travelling in the direction of Hot Springs. Lebow has been a terror to the citizens of Polk County for many years.” He apparently operated from his home on one of the major roads through the county to kill and steal. “Many travelers have lost their horses, and many their lives, by the hands of Lebow, who has been employing his time for years in murder and highway robbery. Travelers have been warned to shun his house and avoid him in any way,” the newspaper reported. The article was reprinted in the Arkansas Gazette, Arkadelphia (Clark County) Southern Standard, and Memphis Public Ledger.

The hanged Lebow may have been Tennessee native Henry Lebow, who appears to have been the older brother of successful Polk County farmer Hiram Lebow. The 1850 federal census shows Hiram Lebow living in Polk County’s Sulphur Springs Township. It shows Henry Lebow in District 10 of Blount County, Tennessee, living with his wife, Sarah; a son; and two daughters. Ten years later, Hiram Lebow, then thirty-nine years old, and his family were living in Polk County’s White Township; the farmer reported a comfortable $600 in real property and $1,800 in personal property in the census. Listed immediately after Hiram in the census was Henry Lebow, forty-two, who listed $300 in personal property and three additional children.

Henry Lebow does not appear in the 1870 census, but his daughter Martha, twenty-two, is shown as living in Hiram Lebow’s household in Ozark Township in Polk County. Hiram Lebow died on March 10, 1880, and is buried in Cecil Cemetery in Vandervoort (Polk County), as is Martha. The burial site of Henry Lebow—who would have been fifty-nine years old in 1877, an “old man” for the time—is not known.

Whether Henry Lebow was the “villain, murderer and horse-thief” lynched in August 1877 is not certain, but the Independent reported of the lynched man that “now that he has departed for that undiscovered country, the citizens of Polk County are at rest.” 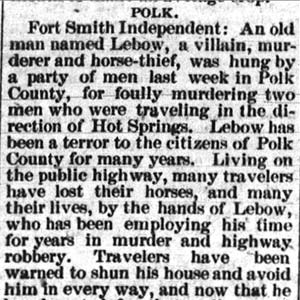