Jones Bar-B-Q Diner, a nationally known eatery in Marianna (Lee County), is perhaps the oldest continuously operating restaurant in Arkansas, as well as perhaps the oldest continuously operating restaurant in the South owned by a black family. In addition, it is the state’s first recipient of the James Beard Award, which many in the food community consider one of the highest honors that can be bestowed on a chef or restaurant. Jones Bar-B-Q Diner has drawn barbecue enthusiasts from around the world while maintaining its important position in this rural Arkansas community.

No one is sure when the restaurant first opened, but multiple generations of the Jones family have manned the pits. Some version of the diner has been serving customers since the 1910s, with Walter Jones as the restaurant’s first owner and pitmaster. Originally, the restaurant was located in downtown Marianna and was named The Hole in the Wall. The restaurant moved to its current location in 1964 and took the name Jones (or Jones’) Bar-B-Q Diner. The pitmaster is James Harold Jones.

The establishment is a humble one. Diners are essentially confined to just one small room, which is lined in cinderblock. The walls are filled with old photographs, Arkansas memorabilia, and newspaper clippings. The menu consists only of chopped pork—either by the pound or on a sandwich, with or without slaw. Orders are brought to the table in minutes.

The sandwiches are simply done. The pork is finely chopped, tender and flavorful, topped with a slightly sweet and tangy vinegar-based red sauce, which gives the meat a wetter texture than other similar pork sandwiches. A light, mustard-based slaw is added, and everything is layered between two slices of Sunbeam white bread.

Until 2012, no person or place in Arkansas had ever been recognized with the coveted James Beard Award. That year, the James Beard Foundation named Jones Bar-B-Q Diner as one of its “American Classics,” praising it for its commitment to quality and respect for heritage. In 2017, the restaurant was among the first inducted into the Arkansas Food Hall of Fame.

The restaurant closes whenever the meat runs out, which on a busy day is often by 11:00 a.m. In fact, many customers begin to show up at 7:00 a.m. to ensure that they will get their barbecue.

On February 28, 2021, the restaurant caught fire, but firefighters were able to keep the flames contained to the pit area. Owner James Harold Jones raised funds in order to rebuild, and on July 14, 2021, the restaurant held a grand reopening. In October 2021, Jones Bar-B-Q landed on the New York Times Restaurant List.

———. “Patronage and the Pits: A Portrait, in Black and White, of Jones Bar-B-Q Diner in Marianna, Arkansas.” In The Slaw and the Slow Cooked: Culture and Barbecue in the Mid-South, edited by James R. Veteto and Edward M. Maclin. Nashville, TN: Vanderbilt University Press, 2011. 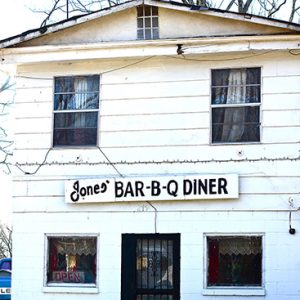