On July 4, 1912, an African-American man named John Williams was lynched near Plumerville (Conway County) for allegedly murdering a deputy sheriff who was trying to arrest him.

Although the Arkansas Gazette calls the deputy sheriff Paul Leisner, most other sources say he was Paul Nisler. Nisler, whose full name was likely Herbert Paul Nisler, was twenty-one years old at the time of his death. He had been in Conway County since at least 1900, when he was living in Plumerville with his parents, Sherman and Nannie Nisler. In 1910, he was still living with his parents (his father this time listed as Andrew S. Nisler) and working on a farm in Howard Township. He was described by newspapers as “very popular” and “highly respected.” According to the Log Cabin Democrat of Conway (Faulkner County), Williams, who had been working on local farms, was from Faulkner County and had worked on building the waterworks the previous year.

On July 5, the Arkansas Gazette reported that the previous day a group of African Americans had been celebrating at Menifee (Conway County), described as “a negro town” six miles east of Plumerville. (Menifee is indeed a historically African-American town that became a regional educational center for black students in the early twentieth century.) That same day, the Arkansas Democrat gave a detailed (and more polemic) account of events. Williams, described as “a vicious sort of negro,” went to the picnic, where the attendees engaged in a “general row.” Likewise, the Log Cabin Democrat reported that the picnic was “one of unusual lawlessness….It is stated that a bar at which both whiskey and beer were openly sold was in operation and a large number of the negroes were drunk. Many fights occurred during the day.” Sheriff C. J. Taylor deputized Nisler, and along with Constable J. M. Johnston they went to Menifee to settle things down. When the officers arrived at the picnic, someone there indicated that Williams was responsible for the fighting. When they attempted to arrest Williams, he allegedly pulled out a gun and shot Nisler in the head. More shots were fired, and Williams was wounded. According to the Log Cabin Democrat, other African Americans then fired in the officers’ direction, enabling Williams to escape. Nisler was put on a train and taken to Plumerville, where he soon died.

Sheriff Taylor captured Williams and, fearing vigilante violence, concealed him under guard in the woods near the public school, intending to take him to jail in Morrilton (Conway County) later that night. However, local citizens discovered his plan, armed themselves, and demanded Williams from the two guards. They led the overpowered guards away, and at around 10:00 p.m. on July 4, Williams was hanged from either a tree or a telephone pole. The mob was described in newspaper accounts as quiet (as is often the case in these reports); the Arkansas Democrat reported: “There was little demonstration by the men, who went about their work as systematically as if the sentence of death had already been legally passed by court.”

The body was left hanging overnight, and the Log Cabin Democrat reported that it was seen by those on passing trains. The coroner cut down the body the next morning and took it to a local undertaker. He then summoned a jury to view both Williams’s and Nisler’s bodies. Their verdict was that Nisler had died by a gunshot fired by John Williams, and that Williams died “at the hands of parties unknown to the members of the coroner’s jury.” The newspapers reported that all was then quiet in Plumerville following these events, although the Log Cabin Democrat noted that there were very few African Americans on the streets. 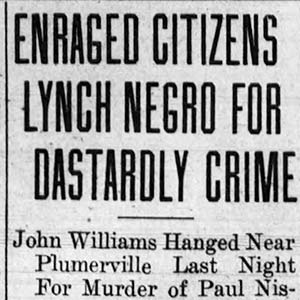