Beginning in the 1880s and increasingly as Jim Crow laws were instituted across the South, newspapers across the United States began to expand their coverage of Southern lynchings. In addition, publications like the Chicago Tribune and organizations like the National Association for the Advancement of Colored People (NAACP) and the Tuskegee Institute in Alabama began to keep annual lists of lynchings. In her 1895 book The Red Record, Ida B. Wells-Barnett also attempted to include a comprehensive list of lynchings. Not all of these lists, upon further analysis, were accurate, and more recent lynching lists often also include certain erroneous accounts. Further examination of newspaper reports shows that subsequent articles, particularly local to the site of the lynchings, later corrected these stories to indicate when no lynching had indeed occurred. Other events that were described as lynchings were actually executions performed after due process of the law, even if the trials and executions occurred under circumstances often dubbed “legal lynchings.”

Such was the case of the purported late May 1893 lynching of John Wallace in Jefferson Springs (Jefferson County). This supposed lynching was reported in a number of national newspapers and included in The Red Record. Accounts of the event were published in early June in Minnesota’s Worthington Advance and the St. Paul Daily Globe. According to these reports, an African-American man named John Wallace was lynched by a Black mob for allegedly assaulting a nine-year-old Black girl named Ida Warren. The Advance’s account was repeated in the June 8 editions of the Warren Sheaf of Minnesota and the State Republican of Jefferson City, Missouri.

Before these later reports, however, the Arkansas Gazette had published the correct information on June 1. According to the Gazette, the alleged assault happened on May 9, but it was not reported until late May. While an “infuriated crowd” did seize Wallace, they were dissuaded by a minister and other local citizens. The Gazette went on to say, “The report was rife today that Wallace had been lynched last night, but from a reliable source it is denied.” 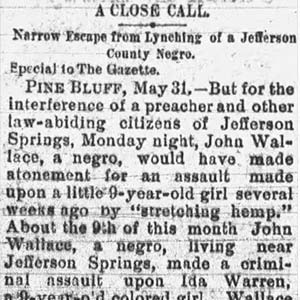 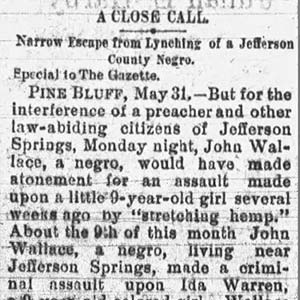