On July 15, 1893, a seventeen-year-old African American named John Cotton was hanged near Cornerville (Lincoln County) for an alleged attack on the wife of John Tucker, a prominent area farmer.

According to the Forrest City Times, on Thursday, July 13, Cotton tried to assault Tucker while he thought her husband was away. John Tucker, however, was in a field nearby, where he heard her screams, and ran to the house. Cotton escaped, and as news spread of the attempted attack, a mob gathered. Cotton managed to elude them, “running like a hunted beast through the fields and woods.” He could find no food and no hiding place, and by Saturday afternoon he was exhausted and collapsed. His pursuers caught up with him and hanged him from a tree, riddling his body with bullets. When Sheriff J. M. Meroney reached the scene, he attempted to disperse the mob, but it was too late. No one was ever prosecuted for the lynching. 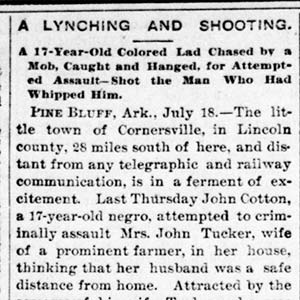