The Jeffery Cemetery is located about seventeen miles southwest of Melbourne (Izard County), one mile off Mount Olive Road, near the unincorporated community of Mount Olive (Izard County). It is the most noteworthy remaining site associated with Izard County’s earliest permanent settlers, Jehoiada Jeffery and his family. It was added to the National Register of Historic Places on November 5, 1999.

The Jefferys, who moved to the area about 1816, are believed to be the first permanent settlers in Izard County. Jehoiada Jeffery—a surveyor, War of 1812 veteran, territorial legislator, and local politician—developed a prosperous farm that supported several of his family members. The family’s farm structures, including a two-story dog trot cabin, disappeared long ago. All that remains of the homestead is the family cemetery.

The cemetery, smaller than one acre, is located on a wooded knoll at the north end of a farm field just 300 yards from the White River. It contains the graves of twenty people identified by name and possibly as many as twenty unidentified. The identified burials are Jeffery family members including Jehoiada and his wife, Mary. The oldest identified burial is that of the Jefferys’ two-year-old daughter, Jane, who died in 1816. Each Jeffery grave is marked by carved headstones and footstones with the initials of the deceased. Headstones of many of the identified burials are tablet-style white marble and stand from one to four feet tall. They are elaborately carved with popular funerary carvings of the day, including clasped hands and hands pointing to heaven. The sixteenth carved stone is of cut block-style gray granite and marks what is likely the newest grave, that of Harvey Landers, which dates to 1908. Landers was the husband of Jehoiada’s daughter Mary. The remaining burials, which have been estimated from ten to twenty, are unmarked or identified with native stones with no markings. All graves follow the tradition of facing east.

The cemetery was struck by a tornado in April 2013. It was covered by fallen trees, and several tombstones were damaged, including that of Jehoiada Jeffery. The cemetery was cleared of debris and repair work was completed. 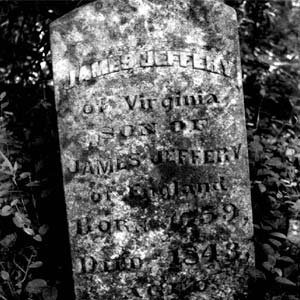