On June 25, 1903, an African American man named Jack Harris was lynched in Clarendon (Monroe County) for allegedly attacking his employer, planter John A. Coburn. In 1900, Harris, a twenty-six-year-old bachelor, was living with his mother Ann in Monroe County and working as a farmer. The 1880 census indicates that Coburn, born in Searcy County in 1866, was living with his parents Arthur J. and Mary Elizabeth Hixon Coburn in White County. By 1894, he was in Monroe County, where he married Sallie D. Knight.

Apparently on June 21, 1903, Harris rode one of Coburn’s mules without his permission. When Coburn asked him for an explanation, Harris allegedly struck him with a piece of timber, breaking one of his arms and inflicting other injuries. Coburn’s wife appeared with a shotgun, saving Coburn from death (according to reports), and Harris fled. The sheriff eventually arrested him and took him to Clarendon.

According to the June 25 edition of the Fort Smith Times, local citizens had been agitated since the murder of a white man by a Black man about a month earlier, and “this fresh offense may fan the desire for vengeance into a flame.” The crime referred to was the murder of a man named Fowler by a Black man named Riley Park. In that instance, the sheriff managed to avoid a lynching by taking Park to the penitentiary in Little Rock (Pulaski County). According to the June 26 edition of the Newport Independent, since Park’s removal from the county, “the negroes are said to have grown very insolent in the Coburn neighborhood.” The Times noted that “the white people are becoming so heartily tired of such occurrences and may take summary measures to stop them.”

This turned out to be the case. Reports differ on the time of the lynching and the size of the mob, but sometime between midnight and 7:00 a.m. on June 25, a mob estimated at between fifteen and fifty friends of Coburn went to the jail and asked Deputy Black for the keys. Sheriff R. F. Milwee, who lived nearby, removed Harris from the jail and hid him under guard in a nearby barn. Feeling that Harris was safely hidden, he then allowed some members of the mob to search the jail, where they failed to find Harris. Other members of the mob, however, anticipating Milwee’s actions, searched the town and located Harris. Overpowering the guard, they took Harris and sent word to the rest of the mob. Harris was allowed to pray, and they then put him in a buggy with a rope around his neck; the rope was then thrown over the limb of a tree.

When the buggy was driven away, however, Harris survived. On their second attempt, they drew him up by hand, and he died by strangulation. According to the Daily Independent, echoing many of the tropes common to lynching reports, the mob proceeded in an orderly fashion, and none of its members appeared to be intoxicated. 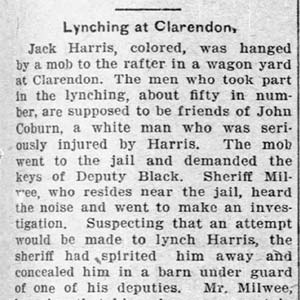 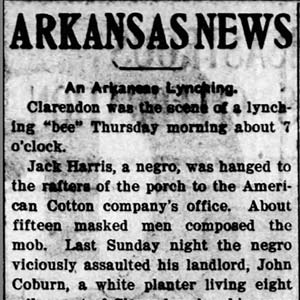 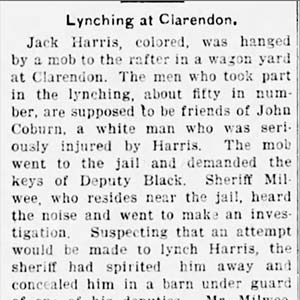