The J. V. Bell House stands at 303 West Cherry Street in Jonesboro (Craighead County). Built in 1895, the Bell House stands as an example of the typical Victorian-era residence, with its high, multiple roof suggesting a Queen Anne influence, and its cut-out stars and moons and sunburst ornamentation incorporating a distinct Oriental flavor. The Bell House was entered on the National Register of Historic Places on November 7, 1976.

John Vernon Bell moved to Jonesboro in the late 1800s and owned and operated one of the city’s first bookstores. Later, he became secretary of Jonesboro Savings and Loan. In 1919, Thomas Hardy purchased the house from Bell. Hardy added two rooms to the upstairs, thus boxing in the back side. Members of the Hardy and Mount families lived in the home until the 1960s. Briefly used as a fraternity house, the dilapidated structure was purchased in 1973 by Arkansas State University professor Michael B. Dougan and his wife, Carol, who began the process of restoring the home.

The façade of the Bell House, which faces north, contains most of its architecturally interesting features. Across the entire first-story façade and down the east elevation extends a one-story veranda. The veranda is enclosed about one-third of the way up, and its slender, turned spindle columns resemble table legs. Suspended from the bargeboard at the roof of the veranda is a border of cut-out detailing featuring spindle work, bric-a-brac, and—at each corner—a piece of bargeboard with cut-out stars and half moons, giving the house an embellished, almost gaudy appearance. A pedimented portico dominated by a starburst design frames the entrance.

On the façade of the second story are two bay windows. The larger of the two bays is contained within a gable, and its center panel has a large double-hung window with simple panes. The bay is flanked by narrower, double-paned windows. Above this bay in the gable are a small balcony; imbricated, scalloped shingles; and a design depicting a sunburst. The smaller bay window has less ornamental decoration but is topped by a six-sided turret.

The east elevation reveals the continuation of the veranda on the first story. On the second story is a gabled window with scrollwork, modillions, and sunburst designs. A small chimney is on the southeast section of this elevation. A screened-in porch spans one half of the first floor of the rear elevation. The house has ten rooms and is without fireplaces. The starburst design is abundantly used and is made more noticeable by the very bright colors used in a restoration in the late 1970s. A photograph and short history of the house appeared in the 1992 book America’s Painted Ladies: The Ultimate Celebration of Our Victorians.

In 1992, the owners constructed a carriage house in back based upon a similar building in Charleston, Missouri. The story of its construction appeared in Old-House Journal in 1994. In 2000, an interior flood caused extensive damage, resulting in the replacement of much of the plaster and the downstairs flooring, and was followed by an expansion of the kitchen with the addition of a sun room in the back. 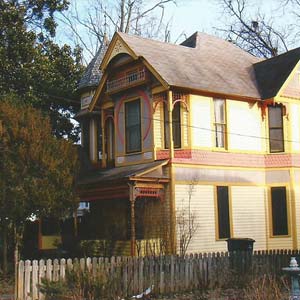