The Independent Order of Odd Fellows (IOOF) Building in Benton (Saline County) stands at 123–125 North Market Street in the Benton Commercial Historic District. Constructed in 1913 by E. Y. Stinson, the building was purchased by IOOF Lodge 174 in 1914 for use as a meeting hall. The building originally housed a jewelry store, but it later began housing both the Saline County History and Heritage Society and the Saline County Republican Headquarters. The large two-story building is located directly across from the historic Saline County Courthouse and is constructed mainly of red bricks and concrete. The building was added to the National Register of Historic Places on May 26, 2004.

The Independent Order of Odd Fellows was founded in Baltimore, Maryland, on April 26, 1819. By 1849, four Arkansas lodges formed the Arkansas Grand Lodge in Little Rock (Pulaski County). By 1913, there were 614 lodges in Arkansas, with more than 30,000 members. E. Y. Stinson purchased the land where the IOOF building was built on April 19, 1913. On June 4 of that year, he borrowed $7,000 from the Georgia State Savings Association of Savannah, likely to pay for the building’s construction. A cornerstone, placed on the building’s southwestern corner, is inscribed on two sides. The Saline Odd Fellows Lodge No. 174 purchased their part of the building from Stinson on September 17, 1914.

The front façade features red brick with three four-pane windows on the left side, a slim two-pane window, three two-pane windows, and another slim two-pane window on its upper level. Its lower level is divided into two separate offices. Its right side faces the neighboring Kelley building, and its left side on West Sevier Street is painted to reflect its status as the home of the Saline County Republican Committee. 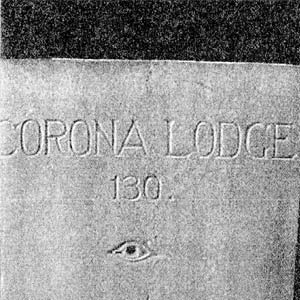