When the United States entered World War I on April 6, 1917, the need for trained medical personnel was great, and medical units of doctors, nurses, and enlisted men were recruited heavily. The American Red Cross asked for units to be formed from hospitals and medical schools across the United States to go to France and England. Arkansas’s contribution was Hospital Unit T, Medical Department, National Army (called Hospital Unit T for short).

Dr. William A. Snodgrass, a Little Rock (Pulaski County) physician with the University of Arkansas Medical School (now the University of Arkansas for Medical Sciences) was authorized to form a unit for military service. His authorization was announced in the Arkansas Gazette on July 1, 1917. This unit was to have twelve physicians, twenty-one nurses, and fifty enlisted men. At first, the doctors were all to be from the UA Medical School. It was soon decided, however, that taking all the doctors would seriously deplete the medical school, so a few other doctors were recruited. In the final accounting, only eleven physicians sailed with the unit. All of the doctors except one had graduated from the UA Medical School, and they were all licensed to practice medicine in Arkansas.

The twenty-one nurses were graduates of nursing schools in Arkansas and had to be licensed in Arkansas to practice. While waiting for the unit to be mobilized, some of the first nurse recruits took other positions, and replacements had to be recruited. The nurses also had to meet standards of the American Red Cross and become Red Cross nurses first. The Switzerland-born head nurse, Anna Saugey, ran into a snag at first, but the problem was resolved since she had been in the United States since age one. The enlisted men were recruited from all over Arkansas and surrounding states. Pharmacists, ambulance drivers, blacksmiths, and those with other relevant skills were especially sought. Because they were in the reserves until mobilized, thirty-seven of the first recruits were called by local draft boards for active service and had to be replaced.

Snodgrass, who was also in the reserve, was assigned the rank of major. He carried on his practice and teaching duties in Little Rock while waiting for the unit to get up to strength, and he also recruited another physician, Alvin Jobe, from the medical school to assist in recruiting. Jobe was named captain and adjutant of the unit. While waiting to be called, the nurses held a dance at the Hotel Marion to raise money to create a fund for themselves for emergency needs.

Finally, the order came for all the doctors and enlisted men of the unit to report in Little Rock by noon on January 29, 1918, and they left the next day for Fort McPherson, Georgia, for training. In February, Snodgrass received the news that Arkansas needed $10,000 to equip the unit or the unit might be split up and assigned to other units. (He had been told at first that the U.S. Army would supply the unit.) He got permission to return to Little Rock and set up fundraising efforts. By March, he and other fundraisers had raised $3,814.50. He then left the fundraising to others and returned to Fort McPherson. On March 28, the nurses left for Lakewood, New Jersey, for training and to be outfitted. The Red Cross provided their uniforms, which cost $200 each. One of the nurses was selected to be photographed for recruiting posters.

The eleven doctors, forty-nine enlisted men, and twenty-one nurses of Unit T were reunited in New York and sailed on May 11 on the British transport Ascania, a converted cattle boat. With them was a female Red Cross volunteer stenographer. The ship, which had 2,000 troops and four hospital units from different states, traveled in a convoy for safety. The accommodations were cramped, and there was not any running water. The passengers were told to keep their life belts with them at all times, and after they entered the submarine zone they slept in their clothes. No lights of any kind, not even a cigarette, were allowed after dark on the decks, and dark curtains were placed over the doorways and port holes. Major Snodgrass was chief medical officer on the ship. The nurses took turns accompanying him on daily rounds.

The ship had a close call from a submarine, but the torpedo passed by them. All the passengers were ordered on deck, standing there for four hours beside their assigned lifeboats.

While they were en route, Unit T’s orders were changed from a hospital in France to one in England. There were no hospitals yet in England for enlisted men, only ones for officers, and it was felt they were needed more in England to staff hospitals being established there. Because of the change in orders, there were no plans when they landed in Liverpool, England. The male members of the unit were sent to a rest camp at Romsey, near Winchester, and the nurses of Unit T to Rubens Hotel in London. After ten days, they were sent to Sarisbury Court, Hampshire, England.

When they arrived at Sarisbury Court, an old mansion of ninety-nine rooms and extensive grounds, they got there before their rations, so Snodgrass used his own money to pay for meals for eighty-two people for three days. At this point, he was ordered to take charge of a field hospital in France and left the unit. Captain Jobe and two other doctors of the unit were sent to aircraft units, while some of the enlisted men were sent to combat units. Sarisbury Court was being converted for a hospital when the unit arrived, but it was not ready for patients. Unit members did some sightseeing, on bicycles or on foot, to occupy their time while they waited. They planted vegetables in the flower beds to help with food shortages and also spent some time in training, especially with gas masks.

After thirty days, the remaining members of Unit T moved again to the Mossley Hill district of Liverpool to American Red Cross Military Hospital No. 4. The hospital was located in Mossley House, an old Gothic-style English town house that had been converted by the British Royal Engineers with a heating plant, running water, and other necessary facilities. The hospital had been established by a major from Michigan, who had been in the medical officers’ reserve corps and sent to England. When they arrived, 150 beds were ready for patients and plans were underway to expand to 826 beds as needed.

The patients were soldiers who got sick in England or while being transported from the United States, as well as soldiers from the front who had been treated at hospitals in France and were awaiting transport to the United States. The patients from the front had often lost limbs or suffered other life-changing injuries. Hospital No. 4 gained a reputation of being one of the finest Red Cross hospitals in England.

One of the nurses related that the worst time for the hospital for her was when the Spanish flu struck. The hospital had two ambulances, and she was assigned to go to the docks and meet ships coming from France with the flu victims. She said they had to pull the sick from among the dead and rush them to the hospital. All the beds in the hospital were full, and tent wards were established. Even these were not enough, and the townspeople of Liverpool opened their homes to the overflow of patients.

Of the twenty-one nurses, two volunteered to return to the United States and sailed on the Melita on October 9, 1918, with some so-called stretcher cases that needed extra care; one other nurse married an officer in England and returned with her husband, and two nurses asked for additional service and stayed overseas for an extended time. In December, the first shipload of convalescing soldiers was ready to sail, and the sixteen remaining nurses of Unit T were ordered to sail with the soldiers. At the last minute, head nurse Saugey became ill, and she did not sail until later. Of the enlisted men, most of them did not sail for a time, and some were assigned to assist doctors on other ships. Only one of the Unit T doctors returned with this group of nurses.

On December 14, 1918, they sailed on the Saxonia with 1,400 sick and wounded soldiers and landed in New York Harbor on December 26. At the same time they arrived, the Atlantic fleet of twenty-one vessels arrived. Ten of those vessels were the great battleships, including the dreadnought Arkansas, and the fleet was described as the greatest naval armada ever assembled. The Saxonia was the last of the vessels to pass in review. The ships were part of huge welcome-home celebrations in New York, and thousands turned out despite a large snowstorm.

The nurses of Unit T were housed in the New York area and thought they would be sent home soon. However, on January 1, 1918, the steamship Northern Pacific ran hard aground on a sand bar near the Fire Island Light near the New York Harbor. Onboard were 2,480 returning soldiers, of which about 1,700 were sick or wounded. The weather was terrible, and the ship could not be moved from the sand bar, although it was in no danger of sinking. On January 2, the Coast Guard removed some of the soldiers and the seventeen navy nurses who had sailed with the ship under difficult conditions. The Red Cross was notified and sent workers and the nurses from Unit T. They were engaged in assisting with the care of the wounded and sick soldiers, mostly stretcher cases who could not be removed from the Northern Pacific due to bad weather and high seas. They spent about a week in this duty before being sent home.

Over the next few months, all the members of Unit T returned home. None were known to have been lost while in service. 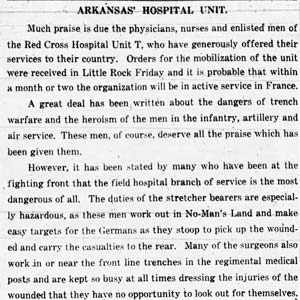