On September 1, 1902, an African American man named in newspaper reports as Hog Wilson was lynched in Ouachita County for having “attempted criminal assault” upon a white woman named Lue Drake.

According to a brief report in the Arkansas Democrat, Wilson attempted to rape Drake at her home, about six miles north of Stephens (Ouachita County), “while she was in the garden gathering vegetables, the family being away.” She informed her brother of this upon his return, “and soon he, with neighbors, had Wilson in custody.” The account ends this way: “He confessed his crime and they hung him without delay. No excitement.”

In an untitled editorial published the same day as it reported on the lynching, the Democrat insisted that Wilson “was the first victim of mob violence in this state for quite a while,” apparently forgetting about the lynching of Lee Newton little more than a month prior. The editorial went on to state, “Had the mob refrained from action Wilson could have been easily punished as the law directs.”

The report from the Democrat was reprinted in multiple statewide newspapers, although some changed the name of Wilson’s alleged victim to Sue Drake. The 1900 census does not record anyone with the last name of Drake living in Ouachita County. Several people of that last name lived in nearby Nevada County, but no one named Lue, Sue, or a variation thereof. Likewise, the identity of Hog Wilson is difficult to determine, no doubt because “Hog” was almost certainly a nickname. 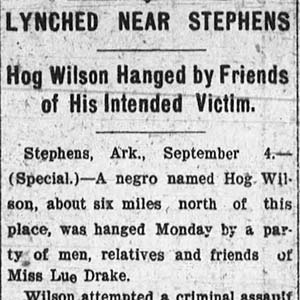