The H. M. Anderson House at 3415 West Markham Street in Little Rock (Pulaski County) is an elaborate Craftsman-style bungalow constructed in 1926. After years of serving as a private residence, it became a Religious Society of Friends meeting house in the mid-1990s. It was listed on the National Register of Historic Places on May 2, 2001.

Henry Mooney Anderson and his widowed mother moved to Little Rock from Marianna (Lee County) at some point after his father’s death in 1882. He married Elizabeth “Bessie” Cooper in 1907 and, six years later, bought two lots on Markham Street and moved into the small house there with his wife and three children. His wife died in 1914, and in 1916 Anderson married Burton Knight Burrows, a widow with a child of her own.

The family moved into Burton Anderson’s Park Street house, and H. M. Anderson rented out the small house then listed at 201 Valmar Street for several years before he began building the present structure, now bearing the 3415 West Markham Street address. It was completed by 1926.

The new residence was designed in the then-popular Craftsman style of architecture, and it featured some unusual elements. The one-and-a-half-story Craftsman bungalow “is unique in comparison to other bungalows in the area,” architectural historian Dr. Jean Sizemore wrote in the National Register nomination. “It is rare to see a bungalow of its modest size and pretensions have a stone exterior. None have the dramatic combination of granite and common native fieldstone. While granite porch walls and porch supports are somewhat common, they most often appear on larger houses, especially Foursquare houses or two-story Craftsman-inspired dwellings. The terracotta chimney pots are most unusual; they appear only on Tudor-style ‘mansions’ in the prestigious neighborhoods in what is termed the ‘Upper Heights.’”

The property is further augmented by a side yard that features shrubberies, flower beds, and large trees. Sizemore noted, “The fence enclosing the side yard and the rear of the property is unique as well. Fieldstone piers anchor vintage cast iron fence panels and feature decorative elements including a cast iron gate, a large millstone and two whetstones.”

Henry Anderson died in the house in 1950, and Burton Anderson died eight years later, after which several others owned the building. A University of Arkansas for Medical Sciences (UAMS) doctor and his wife purchased the H. M. Anderson House in 1977 and lived there until 1995, when they sold it to the Little Rock Monthly Meeting of the Religious Society of Friends. The Quakers continue to meet there in the twenty-first century. 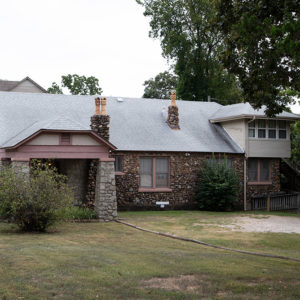 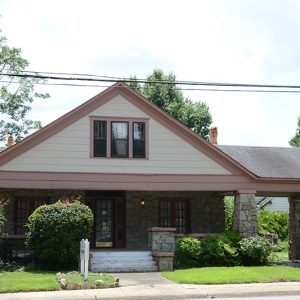