Hercules King Cannon White was a Civil War soldier and guerrilla, a prominent figure in the Brooks-Baxter War during Reconstruction, and a six-term mayor of Pine Bluff (Jefferson County).

Hercules King Cannon White was born on April 4, 1845, in Louisville, Kentucky, the fifth of nine children of James M. White and Dorcas Trimble White. When the Civil War began, he ran away from home and, in March 1861, joined Company E of the Second Kentucky Infantry (CS), but his father found him and had him released from service on the grounds that he was only fifteen years old. The youth soon joined Company C of the First (Helm’s) Kentucky Cavalry, and he was captured at Louisville on November 26, 1862. White was taken to Vicksburg, Mississippi, where he was exchanged.

White later joined John Hunt Morgan’s cavalry, and after surviving Morgan’s raid into southern Indiana, he joined a guerrilla band in Kentucky. On December 23, 1864, he was involved in a raid on the steamer Morning Star, actions for which he was later charged with three felonies and served two years in prison. Following his release, he moved to Pine Bluff, where an uncle and a brother lived, and became an attorney in 1868. He married Julia Dorriss on January 15, 1868. They had four children.

Acting governor Ozro A. Hadley appointed White as prosecuting attorney for the Tenth Judicial District on April 20, 1871, and he served in that role until Act 53 of 1873 formed the Eleventh Judicial District and Governor Elisha Baxter appointed his replacement. When Joseph Brooks contested Baxter’s election as governor, resulting in the Brooks-Baxter War, White sided with Baxter, raising three companies of African-American troops and arriving in Little Rock (Pulaski County) with them by steamboat on April 18, 1874. Joined by white recruits from Pope and Johnson counties, White rounded up a brass band and led the troops in a parade to the Anthony House, where the exiled governor had his headquarters while Brooks held the State House two blocks to the west. White boldly shouted to Baxter, “Furnish us, simply, with the means—give us the authority—pronounce the order and I will guarantee to you sir, that in twenty-five minutes from the time the order is written, Joseph Brooks will either be in hell, or the archives.” A subsequent scuffle ended with the accidental killing of a bystander, and at Baxter’s request White and his command returned to Pine Bluff.

On April 30, 1874, White was informed that Brooks supporter Captain J. M. Murphy had formed a company of 200 African-American recruits at New Gascony (Jefferson County), about sixteen miles downriver from Pine Bluff. White gathered about the same number of white and black troops and steamed downriver on the steamboat Belle of Texas, where they disembarked and attacked Murphy’s force, killing seven to nine men and wounding twenty to thirty. Following his return to the governor’s office, Baxter appointed White as general of the State Militia, a rank the former guerrilla would claim for the rest of his life.

White went back to his law practice in Pine Bluff and continued an elected political career that had started with stints as a Pine Bluff alderman in 1871 and 1873. He made an unsuccessful bid to serve as Democratic candidate for the Second District in 1878, though he did win election to the Arkansas Senate that year. In 1885, he ran for mayor of Pine Bluff on a pledge to clean up gambling and corruption, besting three opponents by a small margin; he won reelection to a second term in 1886. He again was reelected to a two-year term, granted by a change in state law, in 1887, defeating merchant John H. Dellmon 763 to 469.

In 1889, Joseph W. Bocage ran for mayor, and White stepped aside, allowing him to run unopposed. White returned to city hall in 1891, beating R. G. Atkinson 1,573 to 642. The four-term mayor did not seek reelection again until 1901, when incumbent Douglas Claiborne Bell defeated him by thirty votes. Two years later, White sought the office again, running unopposed, and doing so again in 1905 when he won his sixth term as Pine Bluff’s mayor.

White fell ill during his final term as mayor and apparently anticipated his death, leaving the acting chairman of the city council detailed instructions for his funeral. White died on January 16, 1907, and Pine Bluff’s businesses closed for an hour two days later so everyone could attend his burial in an unmarked grave in Bellwood Cemetery. A fundraising effort was started in November 1908, and in January 1914 a nine-foot-tall marker was placed at his grave.

For additional information:
“Battle of New Gascony/Particulars of the Fight—The Killed and Wounded.” Arkansas Gazette, May 9, 1874, p. 2.

Civil War through Reconstruction, 1861 through 1874
Politics and Government 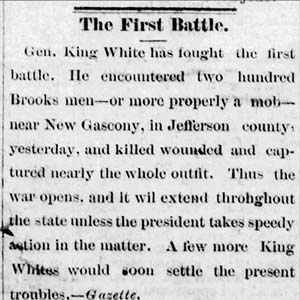