Although various sources give different dates for the lynching, it seems to have happened early in the morning on Sunday, July 10. On July 11, the Arkansas Democrat published an account from a traveler notified only as “H.” According to his report, he had been driving from Des Arc to Carlisle (Lonoke County), which was six miles away, when he saw some men and boys standing a short distance from the road. When he inquired, he was told that they had found a child’s body. They reported that on Friday, July 8, a fourteen-year-old girl named Lucinda Webb had started out for school and then was not heard from. The following morning, a man riding on a path through a field near the road discovered her body in some bushes.

In a story the following day, which was later reprinted in the Chicago Tribune, the Democrat reported that the “negro brute” Henry Smith was responsible for attacking the orphan girl, now referred to as Matilda Webb. According to the Democrat, Smith violently attacked Webb, and after “ruining the little thing, [he] cut her throat, stabbed her in the side and bowels, mashed her right shoulder into a jelly, and beat her brains out with a fence rail.” Smith was arrested, and after a coroner’s inquest he was jailed. Around midnight on July 9, a group of thirty to forty unmasked men got the keys to the jail, “pounced upon the monster like avenging angels,” and removed him from custody. He allegedly confessed to his crime. They then hanged him and threw his body into the White River. Other residents who accompanied them to the river made no attempt to stop them. According to the Tribune (using tropes common to lynching articles of the time), “The lynching was the coolest and most quiet piece of business imaginable.…Popular sympathy is with the lynchers.” While the Democrat conceded that lynching was dangerous and should be prevented, it said, “If there is any circumstance under which it may be permitted, it is such crimes as that committed by the Des Arc fiend.”

The following day, the Democrat published an editorial that contradicted its conclusion of the day before: “Another case of mob violence is reported from Des Arc. Such instances are becoming altogether too numerous. A strict enforcement of the law is the remedy for the evil. There is no reason why this should not be done, and every law abiding citizen in the state will regret and deprecate the lynching at Des Arc last Sunday night, as well as all other acts of mob violence throughout the commonwealth.” 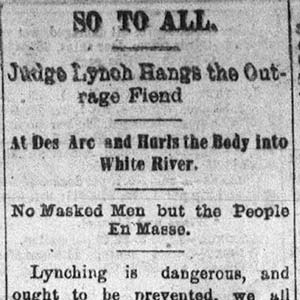