The Helen Dunlap School for Mountain Girls, later known as the Helen Dunlap Memorial School for Mountain Girls, is considered one of the best early examples of a Mountain Mission School in Arkansas, according to historian Brooks Blevins. These schools were supported by churches of various denominations in northern states, and their purpose was to provide secondary academic and vocational education to children living in isolated mountain communities.

The Helen Dunlap School for Mountain Girls was established around 1905 in Winslow (Washington County), a small mountain town on the St. Louis–San Francisco Railway. The building, known as “Boston Heights” and built by the original owners as a family residence, was donated to St. Stephen’s Episcopal Church in Winslow by Dr. Albert Dunlap, a physician from Fort Smith (Sebastian County) who had moved to the area with his family in 1887. Dunlap’s granddaughter, Helen, had died at the age of eight in 1903, and the school was named after her. Helen was the daughter of Maud Dunlap Duncan, later the mayor of Winslow and editor of the Winslow American newspaper.

Financial support for the school came from the Episcopal Diocese of Arkansas under the authority of Bishop William Montgomery Brown, along with the Daughters of the American Revolution (DAR). Both organizations sought funds from members in northern states, and reports on the Helen Dunlap School—among other schools of this type—were regularly provided in newsletters and other periodical publications of both organizations.

An article in one such publication in 1917 stated that “40 girls are given an excellent general education and are thoroughly trained in housekeeping, cooking and sewing. No servants are kept at the school as the girls do all the household work under the direction of the teachers.” The “excellent general education” consisted of reading, writing, and mathematics. Vocational training also included crafts such as rug-weaving. The rugs were sold to provide another source of funding for the school.

The headmaster of the school also served as the rector for the St. Stephen’s mission. Under the guidance of the Reverend Thomas Mabley, the school reached its highest enrollment of around forty girls. The usual range of enrollment was from twenty to forty. In addition to the boarded students, some local girls also attended as day students. Mabley added a chapel featuring blue stained-glass windows to the main structure during his tenure. An additional wing was also added to the northern end, with dormitory housing upstairs and classrooms on the bottom floor.

Teachers from the University of Arkansas (UA) in Fayetteville (Washington County) traveled to Winslow some summers to offer courses in teacher education at the Dunlap school. Also in the summer, a course for young men studying for the Episcopal priesthood was offered.

The Helen Dunlap Memorial School for Mountain Girls remained open until about 1938, when it closed due to lack of funding, as reported in the Winslow American in 1942. During World War II, the building was sold and razed, with the materials used for other construction. By 1983, only concrete foundations and stone steps remained from the original property. 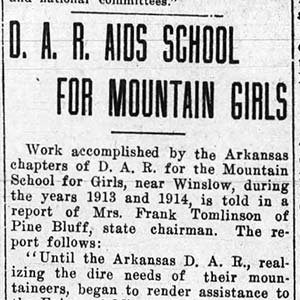