On July 30, 1896, an African American man named Godfrey Gould was lynched by a mob of more than 100 people in Brinkley (Monroe County) for having allegedly attempted to rape a woman.

One early report of Gould’s alleged crime can be found in the July 22, 1896, issue of the Helena Weekly World, which reported that, on Monday, July 13, Gould “attempted to assault one of the gay damsels of his color, when she forcibly and effectively resisted by sending a ball [bullet] through his left cheek, passing out of his right eye.” He was soon arrested by Deputy Sheriffs Sell Johnson and J. A. Rogers, assisted by Deputy Sheriff W. B. Daizell, who “were mindful of his comfort” and conveyed him to Clarendon (Monroe County). However, the Alexandria Gazette of Virginia reported that Gould’s intended victim was not African American but, instead, a white woman named Florence Wright of Brinkley. According to this account, Wright went for a walk at about 10:00 p.m. that Monday night, taking her father’s pistol “to protect herself from the dogs that infest the neighborhood, which is thickly settled.” Gould, described as “a big negro,” attacked her, and when she threatened him with the pistol, he took it from her and “carried her into the woods.” But she saw the “butt of the revolver sticking from her assailant’s hip pocket” and so “snatched it and shot him in the head, bursting out his right eye.” He ran away, and when the authorities were notified about an hour later, they found Gould “fifty yards away from the scene of the attempted assault lying in an unconscious condition and dying.” When Wright was taken to identify the man, “she became wild with anger, and tore a pistol from the hands of the sheriff and fired another bullet at the dying fiend, which missed its mark.”

On the night of July 30, 1896, a mob numbering approximately 150 men, according to a report in the August 1, 1896, Arkansas Gazette, took Gould from the local police officers, who “were attempting to spirit him away,” and hanged him from a tree. The Gazette reported, “The mob was after Fred Booker, who committed a similar crime more recently, but the officers had smuggled him away.” Perhaps this explains why more than two weeks elapsed between Gould’s alleged assault upon Florence Wright and the act of mob violence that claimed his life. His injuries and pitiful condition may have been regarded as comeuppance enough until the mob was denied the chance to lynch their original target, a man who had allegedly committed a similar crime.

The subsequent issue of the Gazette, reprinting a report from the Monroe County Sun, contains more detail about the night of the lynching. “The crowd began gathering early, some came on the Midland [railroad], some by handcars and others on horseback,” the Gazette reported. Fred Booker, an accused rapist from Holly Grove (Monroe County), had been taken to the state penitentiary in Little Rock (Pulaski County) two nights prior to this. Sheriff T. H. Jackson had made late plans to take Gould to DeWitt (Arkansas County), ordering a wagon for that purpose to be placed across the White River, but a jailor asked the sheriff in the presence of the gathering mob “if he intended being present when Gould was taken away.” As a result, the mob placed lookouts around the jail and was able to intercept the men trying to evacuate Gould. The mob then hanged him from a tree. The members of the mob, according to the Gazette, “were not masked and their conduct was very orderly,” a statement reflecting some of the tropes of lynching reports.

Gould’s body was cut down at 7:00 a.m. and “placed in an old house near the Midland railroad, where it was viewed by many persons.” 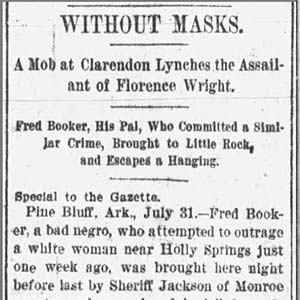