One of the most picturesque, best preserved, and most carefully restored houses in Little Rock (Pulaski County) is the late-nineteenth-century Frederick Hanger House. It retains a high percentage of its original fixtures, fittings, and architectural features and is an outstanding example of the Queen Anne style of architecture. It was listed on the National Register of Historic Places on March 15, 1974.

Peter Hanger, originally from Kentucky, moved to Arkansas in the 1830s, settling first in Chicot County and, by 1848, in Little Rock. In 1850, he married Matilda Cunningham, daughter of Dr. Matthew Cunningham and his wife, who were among Little Rock’s earliest settlers. He invested in real estate and was active in a variety of businesses, including U.S. Mail Contracts, a sawmill, a cotton gin, and the Anthony House hotel.

In 1876, he deeded property on the block bounded by 10th, 11th, Main, and Scott streets to his three surviving children: Margaret, born in 1853; Frederick, born in 1855; and Eugene, born in 1860. Eugene died in 1880, and it is not known if he lived on this block, but both Margaret, who married Judge William C. Ratcliffe, and Frederick, who married Frances Harrow of Iowa, lived in adjacent houses at 1004 and 1010 Scott Street, respectively. Both houses are architectural landmarks, although the Ratcliffe house has not been restored to its original condition and now contains apartments.

The City Directory of 1883–84 indicated that Fred Hanger was then living at 1009 Main Street but owned a house that he remodeled facing Scott, shortly after he was deeded the property. The same directory shows Margaret and William C. Ratcliffe residing at 1004 Scott.

In 1889, while still residing at 1009 Main, Frederick and Frances extensively remodeled the two-story house at 1010 Scott, and he moved in on Christmas Eve. This was the home of two generations of the Hanger family for seventy-eight years.

Fred Hanger was a farmer and the owner of a cotton gin and a granite quarry. He and Frances were socially prominent, and he was very well known in the community at the time of his accidental death at the quarry in 1900 at the age of forty-five. Widowed at an early age, Frances Hanger supported herself as a journalist and society writer. She remained an active clubwoman and amateur historian until her death in 1945. Her sons, Albert and Kenneth, lived in the house after her. Kenneth was a civil engineer and the last Hanger to live in the house. He died in 1967, leaving the house to his son Fred, an attorney in San Antonio, Texas. Fred chose to sell rather than move back to Little Rock. He sold it to the Little Rock Housing Authority, the Urban Renewal Agency. Historic preservation was a new guideline in those years for Urban Renewal, and they decided to try to save the house as a preservation example. After attaching covenants to the deed that required restoration of the house, the authority sold the house in 1971 to Becky and Charles Witsell Jr., who began a meticulous restoration done in phases over twenty years. In 2001, the house was purchased by Kay and John Tatum, who have been good stewards of the house since then.

The house is an excellent example of the Queen Anne style, characterized by asymmetrical, irregular, and complex features, such as the Japanese “moon gate” archway over the front steps. It also has a variety of textures and details made of wood, as well as bays, gables, roof ornaments, stained and beveled glass windows, and a carefully documented and re-created red and taupe color scheme. Even the original wood shingle roof was stained red.

The most outstanding feature of the interior is the large size of the double parlors and stairs, opening into a grand dining room. These primary downstairs rooms retain most of their operating gaslights, mantelpieces, decorative tiles, spindle work, and large paneled doors. The original paint schemes, stair hall stenciling, and some of the wallpaper have been duplicated. Most notable about the Hanger House is the high percentage of original components of the house that has survived since 1889, and the care with which it has been restored and maintained.

This house is a private residence and is not open to the public.

For additional information:
“Before, During, and After.” Photographs of the Hanger House restoration. Butler Center for Arkansas Studies. Central Arkansas Library System, Little Rock, Arkansas. 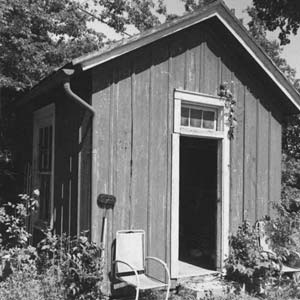